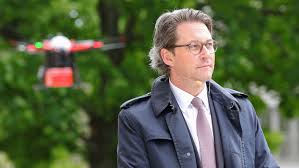 “Germany Is to Become a Pioneer in the Use of Drones,” declared a recent n-tv.de headline. According to trumpet.com, Transport and Digital Infrastructure Minister, Andreas Scheuer, said drones should become part of everyday life. At the same time, Germany’s Ministry of Defense is launching a debate to make armed drones acceptable in the military. It appears the nation’s civil and military industries could change radically within a few years.

In his action plan, the Minister showed air taxis flying over traffic jams and parcel drones relieving delivery traffic in the future. “That could soon be a reality,” wrote n-tv.de. “The federal government has high hopes for ‘unmanned aviation systems’ as new modes of transport. Germany should become a pioneer internationally.” Scheuer has even spoken of a “departure into the third dimension.”

At the presentation in the Defense Ministry’s garden in Berlin, Scheuer displayed a drone that tests medical air freight and aims to reduce transport times, according to Sabrina John, managing director of the Society for Aviation Informatics.

Scheuer intends to promote a transition “from the laboratories into the air.” The action plan focuses on creating more research funding, a new legal framework for the operation of drones, and an increased acceptance of them among the population. The measures will be incorporated into a revision of the German air traffic regulations.

The government’s aerospace coordinator, Thomas Jarzombek, emphasised that drones “have long been much more than a vague vision of the future or a gadget for amateur pilots.” The industry is a “growth driver” and creates high-quality jobs.