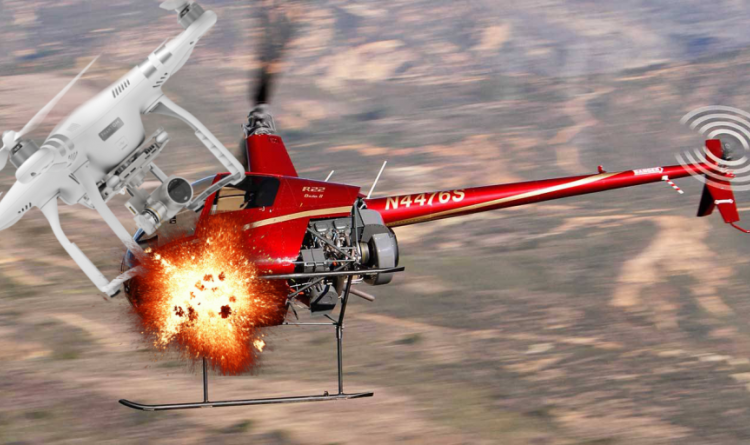 A National Transportation Safety Board (NTSB) study says that a drone recently hit a helicopter, reports dronelife.com. If this happened, it is a stain on the drone community for the operator to collide with a manned aircraft.  Yet, if it occurred, it’s further proof that even if flyers don’t always follow the rules, drones don’t necessarily pose an imminent and life- threatening risk to manned aircraft.

According to the NTSB report a Los Angeles news helicopter was flying in Class G airspace, above 400 feet in altitude under visual rules, when they heard a loud noise.  Originally, the pilot thought that the bang indicated a bird strike.  Following safety protocols, the pilot made a “precautionary landing.” Examination of the helicopter showed a small dent in the horizontal stabiliser, damage that the NTSB report categorised as “minor.”

No drone was found, no drone parts were discovered, and no drone was seen, but the NTSB report still concludes that, “Although no drone was located, preventing complete certainty, all the available evidence was consistent with a collision with a small UAS.”

So is this real or fake news? Many such incidents have proven later to be caused by other flying objects. It may indicate that a drone operator wasn’t following regulations, but the report points out that isn’t clear:

The reported collision occurred in Class G airspace, but higher than the 14 CFR Part 107 regulatory maximum of 400 feet agl for small drones. A provision in Part 107 allows for operations above 400 feet if the drone is within 400 feet laterally of a tall structure. Downtown Los Angeles was approximately 1⁄4 mile away from the collision site, therefore, although the altitude and location are not authorized for drones without a waiver, it is not inconceivable that a drone operator could have been operating near the tall buildings, and deviated or exceeded the lateral requirements.

If the collision occurred, it’s a disturbing incident and indicates the need for unmanned traffic systems, which are developing quickly.  It should not, however, be used as an example proving the inherent danger of drones or the “criminal” or “clueless” behaviour of their operators.  If a drone does hit a helicopter, the event provides one more piece of evidence that when drones do strike manned aircraft, the manned aircraft usually wins.

Therefore, evaluating drone risk is difficult. Different studies, the vast majority of which rely upon simulation, have evaluated the risk as anything from “minimal” to “extreme.”  These studies don’t provide adequate information on which to base regulation.  In fact, the only data available shows that on the rare occurrences when drones actually do collide with manned aircraft, there is little or no serious damage.

That’s not a coincidence, says Paul Rossi of Nine Ten Drones, a N.C.-based drone training and services company. Rossi has a military background in aviation maintenance: and as an unmanned pilot, he’s focused on safety.  Rossi says that in his experience, “Commercial off-the-shelf (COTS) drones don’t have the size or weight to cause catastrophic damage to a manned aircraft.”  As systems become more complex and larger drones become increasingly common, the situation may change, but “the current commonly used drones aren’t likely to down a manned aircraft,” continues Rossi.

Most in the industry agree with him, yet, it’s hard to prove.  Real drone incident data is the only way to truly evaluate risk, and right now, where is it?  A point leading drone manufacturers have been making for years as the industry struggles to win over public opinion and reach a point of risk-based regulation.

Nobody in the drone industry would argue that education and a culture of safety shouldn’t be a priority and both the FAA and Community-based organizations like the AMA are investing time and money in this endeavour.

Yet, expecting every operator after purchasing a drone, to follow the rules exactly isn’t necessarily a realistic goal, any more than it is to expect all vehicle drivers to follow every traffic law.  It’s a standard that cannot be achieved despite the industry’s best efforts.