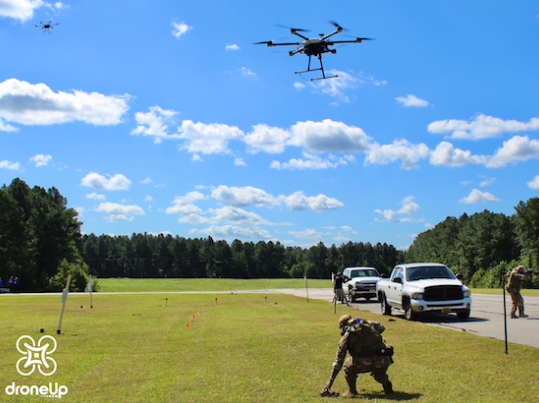 The statement continues: DroneUp provided a patent-pending technology delivery solution and experiment execution for the operational experiment, which was led by Lieutenant Colonel Michael Atkinson, MBE, British Army. The experiment requirements included: (1) Identifying and delivering a specified payload to three different recipients; (2) Delivering payloads unique to each recipient; (3) Drones locating the recipient; (4) Drones delivering the payload autonomously (pilotless); and, (5) Visual confirmation of the correct unique payload. Further, the requirements had to prove where the recipient was either static or mobile.

“Drone deliveries create numerous opportunities. By allowing for variable delivery destinations that can be transmitted and updated in real-time, we’ve taken it to orders of magnitude over the traditional point-to-point drops. Additionally, when paired with automated logistics, the ability to get the right supplies, to the right people, at just-in-time speed creates a powerful platform for land, sea, and air,” said John Vernon, CTO of DroneUp. “By combining the right location information, signaling, and management tools, we’ve created an intermodal solution that quickly addresses what is needed and the best way to get it where it needs to go. Then we’ve placed the power in the requestor’s hands to determine when, how, and where the delivery will take place. We see this as a game-changing opportunity.”

Through the use of dedicated colored UTM training ammunition DroneUp, OPEX, and the special operations teams tested and demonstrated the accuracy and reliability of an autonomous drone in take-off, flight, location of, and delivery to a specified recipient in open terrain – with no external assistance. DroneUp and OPEX found that the experiment was successful and this capability has vast utility across numerous military and deployed roles, but especially in emergency medical resupply and the assistance of isolated personnel. The experiment findings and data will be shared across several Allied Command Transformation branches for further development of concepts.