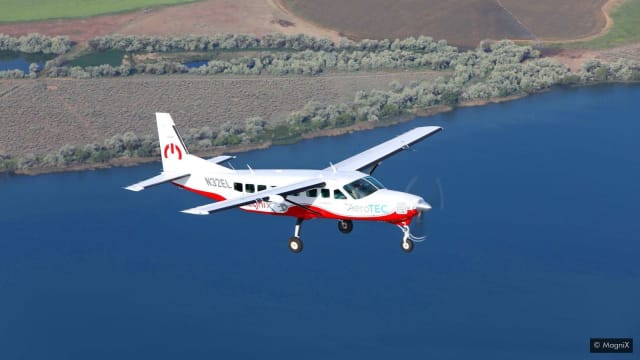 The world’s “largest electric aircraft”  has completed its first successful test flight. This milestone further showcases the potential as well as the problem of electric air travel, reports engineering.com, where battery limitations continue to be an obstacle.

AKA the “eCaravan,” the plane is a modified Cessna 208B Caravan with a wingspan of over 50 ft. The aircraft flew for 28 minutes, reaching 100 miles per hour at a peak altitude of close to 2,500 ft. While the eCaravan only had the pilot’s seat installed, the Cessna model is capable of carrying up to nine passengers.

Electric aircraft potentially can be cheaper, quieter and safer to operate than their fossil fuel-powered counterparts as well as reducing or even eliminating that elephant in the room, carbon emissions.

According to magniX CEO Roei Ganzarski, the eCaravan’s flight cost a mere USD6, while a 30-minute flight powered by conventional aircraft fuel could cost USD300. The eCaravan’s engine is half as noisy as conventional planes, where electric engines are much easier to maintain than their turboprop equivalents. Yet, the milestone flight also highlighted the significant obstacles e-planes need to overcome in order to be commercially viable.

To power the motor, the eCaravan carried 2,000 pounds worth of lithium-ion batteries at a total weight of around four tons, which is half of its mass dedicated just to the batteries. And while batteries continue to get lighter, they are still far too heavy to replace conventional fossil fuels in aircraft. Current batteries can be more than 30 times heavier than an equivalent amount of liquid fuel. There is further complication too. While, a fossil fuel-powered aircraft gets lighter as it burns its fuel, an electric plane will still be burdened by the weight of its drained batteries.

This severely impacts the electric aircraft’s range for while the eCaravan’s range is 100 miles, a regular Cessna Caravan of the same weight can fly 1,500 miles.

The eCaravan will continue to undergo extensive testing and development, with the aim of securing Federal Aviation Administration design approval in late 2021. AeroTEC and magniX hope that their aircraft will be able to take on regional passenger and short cargo routes and do so at lower costs and with lower emissions. Ganzarski conclude, “We truly believe that it is on flights of between 50 and 1,000 miles that electric aviation will take hold at first.”

Watch Video (close to bottom of the page)