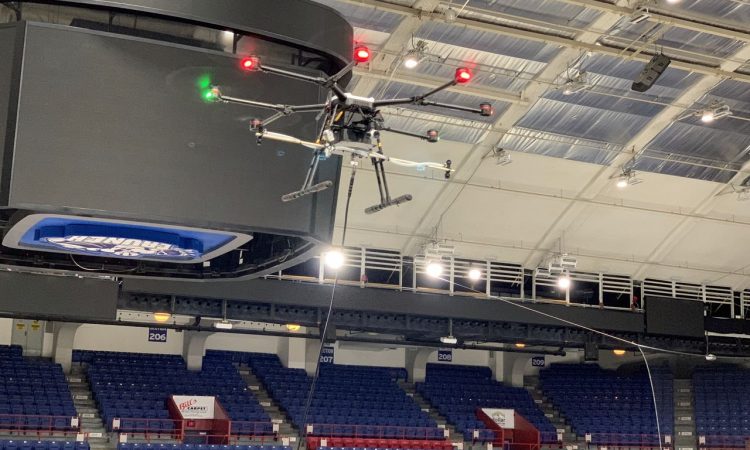 Syracuse startup EagleHawk has developed a drone that can spray disinfectant to quickly kill COVID-19 in sports arenas and stadiums reports syracuse.com.

EagleHawk specializes in drones that use thermal cameras to detect roof leaks for government, college and university, medical and retail buildings. But when the coronavirus pandemic took hold in the America much of that business dried up.

The company quickly shifted gears. It removed the thermal cameras from their craft and replaced them with a device that sprays disinfectant. “As a team, we just kind of took a step back and said, ‘How can we become part of the solution going forward with the pandemic,’” said CEO Patrick Walsh.

The disinfectant is stored in a tank on the ground and pumped to the drone through an attached hose. A second craft flies near the disinfecting drone to hold the hose up to prevent it from getting caught on a seat or other objects.

Walsh said the system can be used in any large outdoor or indoor facility. The company is marketing it to college, and major and minor league sports teams as a way to make their facilities safe for fans.

Those places are shut down because of the pandemic, but Walsh said the company’s new service will come in handy when they reopen. “We’re getting strong interest now, but I think everybody’s in a waiting game, unfortunately,” he said.

Walsh said the drones can quickly disinfect every seat as it flies around the facilities, piloted by an operator. Having employees walk around and spray thousands of seats after each game would be expensive and so time consuming it would be impractical, he explained.

“Say you have a hockey game at the War Memorial,” Walsh said. “We would come out that evening or the next morning, do the cleaning and have it ready to go for the next day.” Spraying with a drone also is safer than having employees manually clean the facilities, he said. “Now people won’t be directly exposed,” said Walsh. “The drone will do the job.”

EagleHawk won $500,000 in the Genius NY business competition at The Tech Garden, a work accelerator in downtown Syracuse, in 2019. The company’s headquarters are in Buffalo, but it maintains an office at the Tech Garden. It employs 10 people.