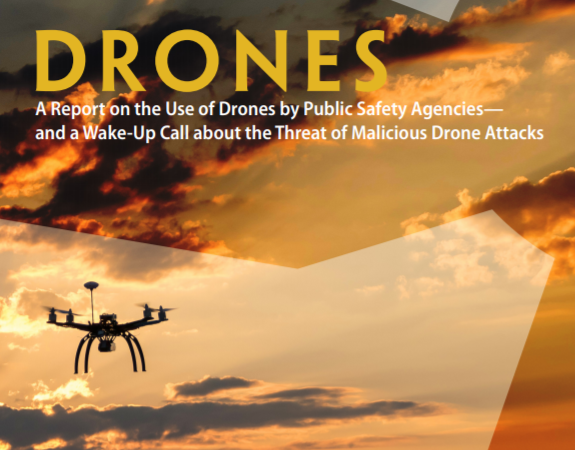 The U.S. Department of Justice, Office of Community Oriented Policing Services (COPS) has released a guide on police use of drones as well as the threat of malicious drones. Drones A Report on the Use of Drones by Public Safety Agencies— and a Wake-Up Call about the Threat of Malicious Drone Attacks reports on two opposite but related issues: the use of drones by police agencies to protect public safety and the use of drones by malicious actors to commit various crimes such as acts of terrorism.

Law enforcement agencies who have deployed drones say there are many benefits associated with using these devices.  “Prior to implementing a drone program, state and local agencies must consider a number of factors that will impact the operations of their program, including federal, state, and local laws and regulations; conducting community outreach; selecting drone equipment; and funding the drone program,” says the report.

The report then goes on to explain ways to engage with the community before implementing a drone program to ensure support for the programme and looks at the different kind of ways agencies can ensure they purchase the most effective drones for their operations.

In terms of the use of drone by malicious actors:

“As of early 2020, the United States is extremely vulnerable to drone attacks because only in late 2018 were federal law enforcement agencies given the legal authority to use the most effective types of technologies to detect and mitigate drone threats. Local police and sheriffs’ departments still are unable to purchase or use most counter-drone technologies because of concerns they might break the law when employing them and the danger of interference with air traffic in the National Airspace System. This is not merely oversight by Congress and federal agencies; there are important reasons for limiting drone detection and mitigation technologies. Careless or unskilled use of these technologies could result in disaster. For example, technologies that use radio signals to jam an incoming malicious drone or seize control of it, improperly used, might interfere with radio signals used by commercial or private airplanes or air traffic controllers.

“A number of federal and local law enforcement agencies have begun to explore counter-drone strategies at major events and mass gatherings such as the Super Bowl. But this work is still developing. Federal, state, and local lawmakers and government officials, including law enforcement officials, should accelerate their efforts to address these issues as soon as possible. The drone strikes against oil facilities in Saudi Arabia in September 2019, which temporarily disrupted approximately half of that kingdom’s oil production capacity, demonstrate how much harm can be done by the malicious use of drones.

“The United States must not wait until it suffers a drone attack to undertake large-scale efforts to develop strategies by law enforcement agencies at all levels of government for (1) identifying drone threats and (2) mitigating drone threats in real time.”

“The new authority for the FAA to regulate drones through rulemaking requiring remote identification is a separate but related critical issue contained in the FAA Reauthorization Act of 2018. Implementing “remote identification” will mean that law enforcement agents can immediately be alerted electronically to the presence of a particular drone and can read the electronic “signature” of the drone and receive information about the identity of the operator. This will help agents distinguish drones of hobbyists and legitimate organizations, such as TV news drones, from potential threats. Local police are left out of the new anti-drone law. The new federal law does not provide authority to state and local police to disable threatening drones. Only certain federal agencies are given these new powers. That said, state and local police agencies can apply to seek assistance from DHS and DOJ which can use their authorities under the act upon request from the chief executive officer of the state or territory concerned.”