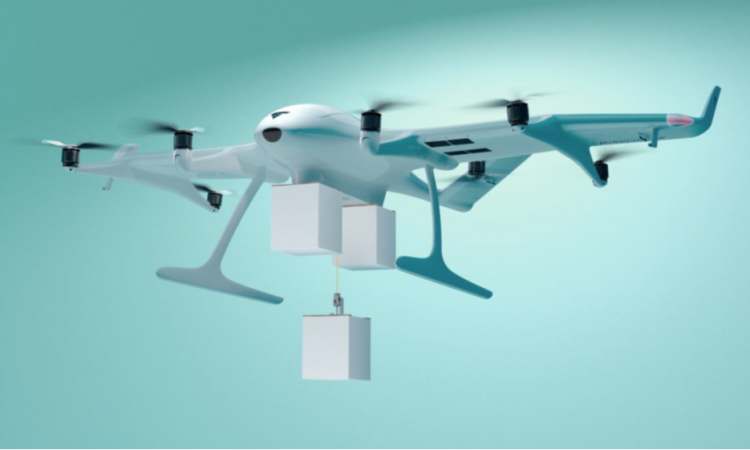 Wingcopter has launched its Wingcopter 198 all-electric, vertical-take-off-and-landing (eVTOL), fixed-wing drone that can carry up to three packages.

“The Wingcopter 198 is a game-changer for drone-based deliveries, ready to create logistical highways in the sky. It can be perfectly utilized as a fleet solution in delivery networks to create new opportunities, everywhere”, said Tom Plümmer, CEO of Wingcopter.

The Wingcopter 198 takes off and lands vertically anywhere without the need for additional infrastructure, says the company in a press release, and smoothly transitions into quiet and enduring forward flight. It can carry payloads of 6 kilograms (13 pounds) on one battery charge over 75 kilometers (47 miles), or up to 110 kilometers (68 miles) with less payload, even in challenging weather conditions.. The aircraft’s top speed of 150 km/h (93 mph) enables on-demand express deliveries.

“The unique triple-drop mechanism allows for separate and precise winch-delivery of up to three packages to multiple destinations per flight. Alternatively, the Wingcopter 198 can deliver two medium-sized packages or one large package providing maximum flexibility in size and shape. The entire delivery process is fully automatic. In addition, one operator can control a fleet of up to 10 Wingcopter 198s simultaneously anywhere in the world via new control station software. Moreover, the Wingcopter 198 is equipped with advanced maintenance technology to avoid unplanned downtimes, improve parts reliability, and lower maintenance costs.”

According to the company the redundant system architecture includes eight instead of four motors, the Wingcopter 198 provides an extremely high degree of reliability and safety. All other essential components such as the flight controller, airspeed sensor or battery are also redundantly integrated. The main communication link to the operator is LTE/5G, backed up by satellite. Specially developed detect-and-avoid software combining ADS-B, Flarm, Remote ID and visual artificial intelligence interprets the flight environment in real-time and automatically initiates evasive maneuvers, as required. Downward-looking cameras use AI-based optical sensing for accurate and safe parcel dropping as well as precision landing in combination with obstacle avoidance.

“The Wingcopter 198 software and interface design were developed with a clear focus on making the user’s workflow as simple and efficient as possible. It allows for fully autonomous, beyond-visual-line-of-sight (BVLOS) flights and automated deliveries. The smart batteries can be swapped within seconds to maximize time in the air. The Wingcopter Cloud allows for mission planning to be independent of the operation by using different control stations. APIs enable a seamless integration of fleet information into customer software solutions.”