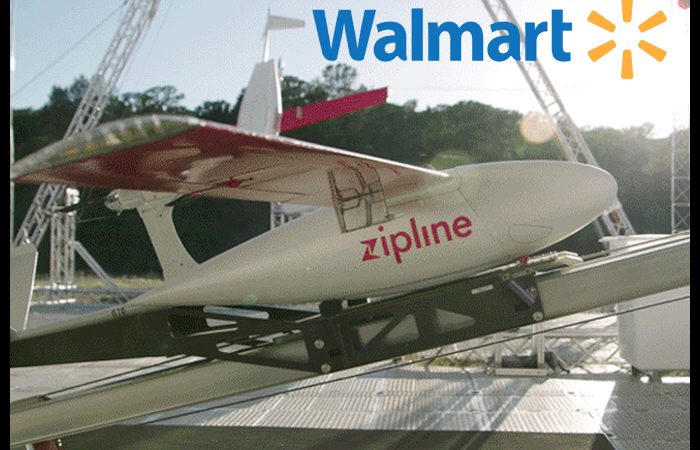 Zipline has partnered with Walmart for a new drone delivery operation in Northwest Arkansas starting early next year, reports theverge.com. The trials will begin near to Walmart’s HQ in Bentonville. The initiative is for on-demand deliveries of health and wellness products with the potential to expand to general merchandise.

Zipline’s rapid launch and release system allows for on-demand delivery in less than an hour, and when operating from a Walmart store, can service a 50-mile radius, about the size of Connecticut State.

Tom Ward, Senior Vice President of Walmart’s Customer Product, says on the company website, “We are exploring how drones can deliver items in a way that’s convenient, safe and fast. In our latest initiative, we are teaming up with Zipline to launch a first-of-its-kind drone delivery operation in the U.S.”

Earlier this year, Zipline announced it was partnering with a hospital scheme in North Carolina, U.S., to carry out contactless deliveries of medical supplies and PPEs. While, back in 2016, the company launched the first national drone delivery system in the world to deliver blood to patients in remote areas of Rwanda. The partnership with Walmart is the first step toward potential national-scale operations across the US.

Ward continues, “To date, Zipline has safely delivered more than 200,000 critical medical products to thousands of health facilities serving more than 20 million people across multiple countries. This uniquely positions them for national-scale operations across the United States.”

This forthcoming trial is the latest of Walmart’s moves towards wider drone deployment. Back in 2015, the retail giant conducted delivery tests, and then a year later experimented with using the craft to check warehouse inventory. And last week, Walmart announced a small pilot program in North Carolina using Flytrex automated drones to convey “select groceries and household items.” The number of craft  involved in that trial is unclear.

Verge writes, “It will be interesting to see which of the two retail giants hyperfocused on drone deliveries— Walmart and Amazon— makes the quickest inroads. In August, Amazon got approval from the FAA to operate as a drone airline in the US, which could mean the beginning of larger commercial operations for the retail behemoth.