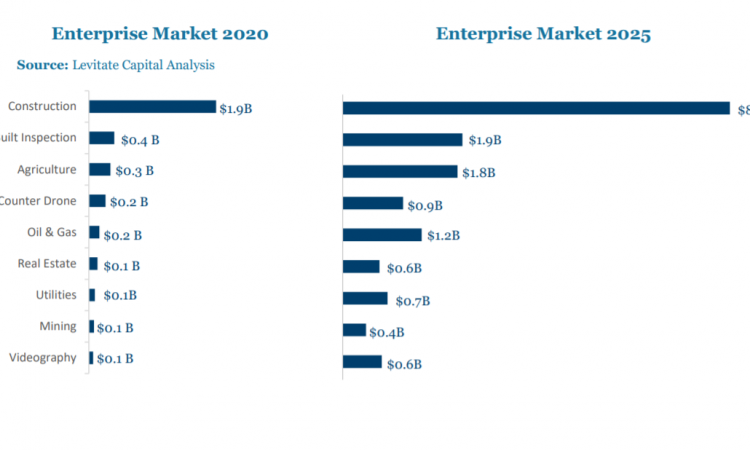 The global drone economy will grow from US15 billion to USD 90 billion by 2030, according to a new White Paper “The Future of the Drone Economy”, from Levitate Capital,  a company which gives major financial support to Matternet, Skydio, Dedrone, Skyports, Volocopter and others. “Enterprise will remain the fastest growing segment until 2025. Logistics will become the fastest after 2025. Defence will remain the largest segment until 2024. Enterprise will become the largest after 2024. Asia-Pacific will remain the largest non-defence market through 2030,” according to high level conclusions of the market research.

Perhaps some of the most unusually conservative forecasts for a major UAM investor include the prediction of 2023 for the approval of commercial drone flights above 400 ft to allow long-distance transit operations and the end of 2026 for the first commercial operations of passenger eVTOLs. 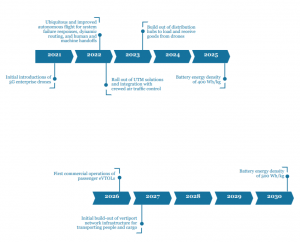 “The first deployment of eVTOL aircraft will likely be in a point A-to-A curated service for tourists by 2025. As suggested in our estimated cost of USD8.69 per mile, or USD2.17 per available seat mile, by 2028, transportation by eVTOL will be a premium service comparable in per-mile price to Uber Black but far less expensive than a helicopter. Therefore, the second phase of eVTOL commercial deployment is anticipated to involve piloted operations along existing helicopter taxi routes. In this second phase, many eVTOL operations are expected to operate as shuttles between airports and sprawling metropolitan areas, similar to ridesharing today. Ridesharing giant Uber generated 23% of its 2019 gross ridesharing bookings from five urban areas: Chicago, Los Angeles, New York, the San Francisco Bay Area, and London. Moreover, 15% of rides are trips that either started or were completed at an airport, and Uber expects this percentage to increase in the future. A robustly integrated air traffic management system will be critical in deconflicting airspace with hundreds of new inbound and outbound eVTOL services. Like airliners, air taxis will need high utilization rates and high load factors to make the unit economics accessible to a mass audience. 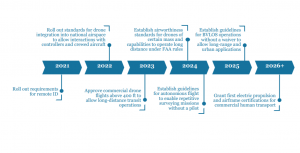 Our analysis estimates that initial passenger eVTOL will cost ~USD3.5 million, roughly the same as a five passenger Bell 407 helicopter and will decrease to about USD1 million per vehicle by 2035. Initial trip distances will start with intercity commutes of ~30 miles by 2028 and increase to up to 100 miles by 2035 as battery technology and propulsion systems improve.”