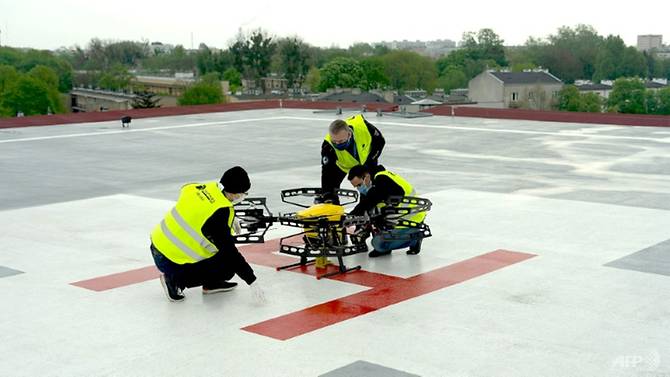 A Polish company is hoping to help save lives by speeding up deliveries of covid-19 test samples and medical supplies by employing drones.

According to channelnewsasia.com, the Spartaqs drone-maker said late last week that it had successfully flown coronavirus samples from one Warsaw hospital to another in a test-run that it hopes will pave the way to the use of drone technology for medical purposes.

The return flight of the Hermes V8MT drone “was an absolute success,” Slawomir Huczala, Spartaqs founder and chief engineer, told AFP. “The flight of the drone, travelling at 12 metres per second, only took several minutes at a height of 80 metres,” he said, adding that the two hospitals equipped with heliports were 3.4 kilometres (two miles) apart. Spartaqs quoted one of the hospitals as saying drone transport could become vital in battling the coronavirus pandemic by boosting the rate of testing.

Poles have been required to stay home since last month to stem the spread of the coronavirus, which officials say has killed over 630 people and infected close to 13,000 in the EU country of 38 million people.

The Spartaqs drone is specially adapted for emergency transport of blood and pharmaceuticals, but also hearts destined for transplant. Travelling at speeds of over 80 kilometres per hour, it is more reliable and faster than a traditional ambulance as it steers clear of traffic congestion. The test flight was supervised by medical experts working with a police anti-terrorism unit, according to a Spartaqs statement. The company has obtained BVLOS (beyond visual line of sight) certification, a key requirement for long-distance drone transport services.

Based in the southern Polish city of Katowice, the company, which produces several types of drones including ones with military applications, said it spent years working on the medical version of Hermes V8MT.