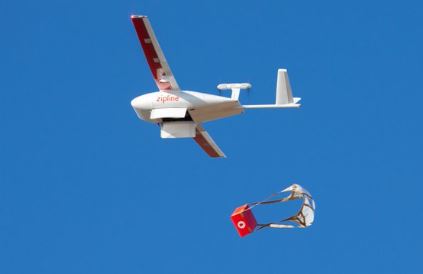 On 24 April 2019, Zipline launched a medical supply delivery programme in Ghana. The company has already undertaken similar projects in Rwanda and Tanzania,- according to the Zipline’s website it had made more than 13,000 life-saving deliveries to date, having flown over 1 million km.

According to a Zipline press release

“Today, during World Immunization Week, President Nana Akufo-Addo of Ghana officially launched the world’s largest medical drone delivery service during an inaugural ceremony in the city of Omenako, site of the first of four Zipline drone distribution centers in the country.

“Zipline’s commercial partnerships with Ghana and Rwanda are expected to help save tens of thousands of lives over the next several years. Zipline is hard at work catching up to demand to expand drone delivery services to developed and developing countries across Africa, South Asia, Southeast Asia and the Americas throughout 2019, including the United States. Zipline is working with the U.S. state of North Carolina to launch its medical drone delivery as a part of the U.S. Federal Aviation Administration’s (FAA) UAS Integration Pilot Program (UASIPP) in Q2 of 2019.”