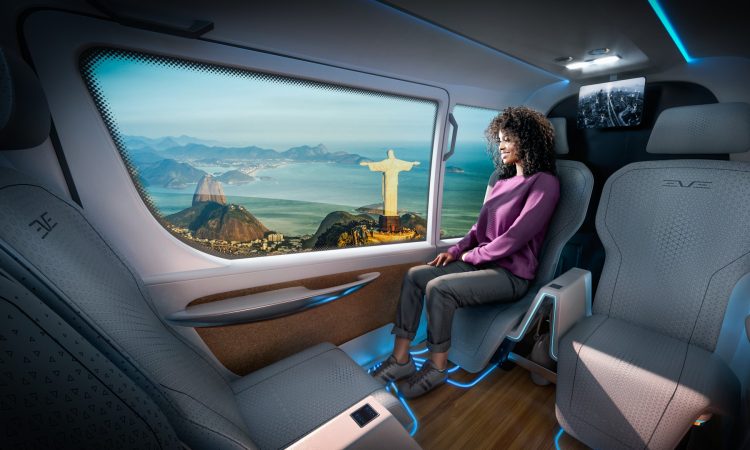 Eve Urban Air Mobility (“Eve”), an Embraer spinoff, has announced it is cooperating with strategic partners and government entities for the development of a new concept of operations (CONOPS) for the future market of Urban Air Mobility (UAM) taking place in Rio de Janeiro. The objective is to convert the acquired knowledge into a working data and analysis framework to guide all operational aspects of the future of UAM.

“The substantial CONOPS collaboration includes partners such as Helisul Aviation, one of the largest helicopter operators in Latin America; Skyports, a company that designs, builds, and operates vertiports; Flapper, an independent platform for on-demand flights; EDP, one of the largest companies in the energy sector. Also included in this project are Beacon, an EmbraerX spinoff with a platform that connects the ecosystem of aviation maintenance services, and Atech, an Embraer Group company responsible for the development, implementation and support of air control system, and air traffic management (civil and military).

“All parties will work on safely introducing and accelerating the UAM market’s growth in Brazil and supported by RIOgaleão, responsible for Rio de Janeiro’s Tom Jobim International Airport and Universal Aviation, one of the largest airport support companies, as well as Brazilian Association of General Aviation (ABAG, Associação Brasileira de Aviação Geral).

“We want to explore new and practical concepts to facilitate the safe introduction of the urban air mobility industry in Brazil. In this initial stage, we will describe the main characteristics and requirements of the ecosystem, from the perspective of the users, partners, entities and government departments involved”, said André Stein, Eve’s CEO. “According to concept evolution, we will conceive how to enable the purpose of democratizing urban air mobility in a safe, economical and accessible way.”

Eve reports this first simulation will happen by the end of the year in Rio de Janeiro. Conventional helicopters will be used simulating Eve’s Electric Vertical Aircraft (EVA also known as an electric vertical takeoff and landing or eVTOL).

The working group led by Eve Urban Air Mobility began working in August 2021 on a concept of operations (CONOPS) to integrate urban air mobility into Brazilian airspace, starting in the city of Rio de Janeiro. More than 50 members from institutions such as ANAC, DECEA, Helisul, Skyports, Flapper, EDP, Beacon, Atech, RioGaleão, Universal Aviation, and ABAG collaborate on this innovative initiative.