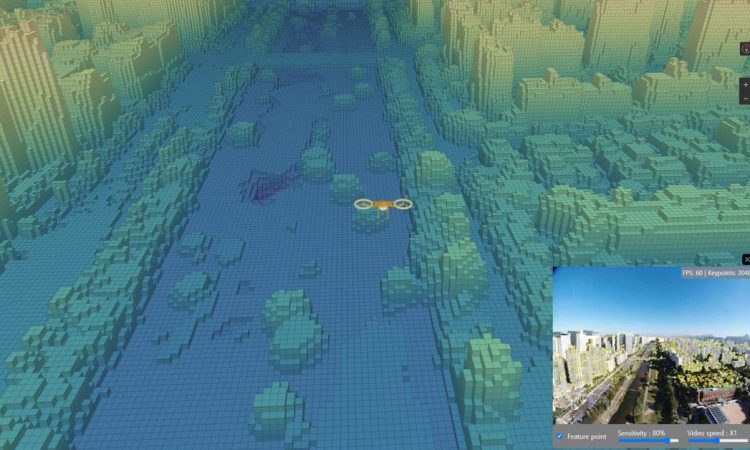 “MintAir”, a Korean Advanced Air Mobility (AAM) service provider, has partnered with Wemap Co. and the City of Seongnam to demonstrate a 4D AAM map, a core enabling technology for AAM flight route development and operation. The company says “Using a commercial drone, the demonstration flight was performed at the Housing Expo (Jutaekjeonsigwan) site in Seongnam on September 24th, 2022.”

In a press release MintAir reports “The 4D AAM map was constructed by voxelizing urban buildings and airspace. The map provides a precise flying corridor for UAV and AAM routes, enables emergency route change, and prevents collusion with obstacles such as high-rise buildings. Furthermore, the map provides real-time updates of airspace information which is critical for the safe operation of remote piloted or autonomous flights.

“MintAir and Wemap developed and demonstrated this map solution to prepare for the K-UAM Grand Challenge program organized by the Korean Ministry of Land, Infrastructure, and Transport. In May 2022, MintAir formed a consortium with Lotte Group and its subsidiaries — Lotte Rental, Lotte Engineering & Construction, and Lotte Data Communication – and submitted a proposal to participate in the K-UAM Grand Challenge program.

“This 4D AAM map will support passenger and cargo transportation via the proposed AAM hub in Seongnam, a satellite city in metropolitan Seoul. This hub will boast the ability to provide urban and regional air service directly from a major metropolitan population center to anywhere in Korea, including even the most remote destinations such as the Jejudo and Ulleungdo islands.

“This demonstration comes on the heels of MintAir’s recent announcement about signing a letter of intent to add Electra.aero’s nine-passenger eSTOL aircraft to its fleet to provide regional air service in the Korean market. MintAir also announced forming strategic partnerships with Jaunt Air Mobility and with Skyworks Aeronautics, adding their electric rotorcraft to its eVTOL fleet to provide urban air service in Korea.”