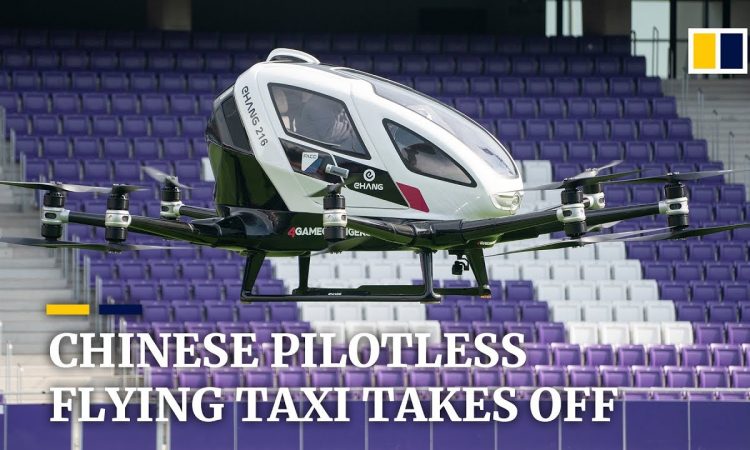 EHang (EH) announced that total revenues in Q1 2020 were RMB18.8 million (USD2.7 million), an increase of 80.3% year over year. Revenues from air mobility solutions were RMB15.1 million (USD2.1 million), 80.4% of the total revenues and up 256.0% year over year.  Perhaps most importantly, the company announced that sales of the EHang 216, the world’s first commercially-delivered passenger-grade AAV, reached 9 units, an increase of 200% from 3 units in the first quarter of 2019.

While 9 units doesn’t yet represent a huge market, it does indicate that EHang has moved well beyond concept to performing trials around the world, an indication that passenger drones are on the cusp of wider adoption.

The company is also broadening it’s applications: in addition to emergency response operations revealed in the current crisis, EHang recently received certification from the Chinese government for cargo delivery trials.

: In January 2020, the company achieved a new landmark, conducting the first-ever flight in the United States of a passenger-grade AAV. This was performed in the state of North Carolina. The AAV flight was underpinned by permit and other support from the North Carolina Department of Transportation (NCDOT) and the U.S. Federal Aviation Administration (FAA).

: The following month, EHang 216 obtained the first operational permit in Europe for flight testing of an AAV from the Civil Aviation Authority of Norway, laying a solid foundation for future UAM operations in other European countries.  Furthering its penetration in Europe, in March 2020 EHang established partnerships for UAM with the city governments of Seville and Llíria in Spain.  Both cities are members of the “UAM Initiative Cities Community”, one of the European Union’s EIP-SCC (European Innovation Partnership on Smart Cities and Communities) projects, which was established to promote the transformation of urban three-dimensional transportation.

: During the outbreak of COVID-19, EHang pursued opportunities in medical emergency response. Both the 216 passenger-grade AAVs and the Falcon B non-passenger-grade AAVs demonstrated a number of valuable applications, such as transport of medical supplies and personnel, as well as in-air inspection and broadcast of instructions above populated areas in several cities of China, including Guangzhou, Shaoguan and Hezhou.  These time-and-cost-efficient solutions created new use cases and market demands for AAVs in emergency services.

: Last week, EHang was granted permission from the Chinese government to carry out commercial pilot operations between the shore and islands at a customer site in Taizhou. Officials say this makes the startup “the world’s first autonomous aerial vehicle company approved by a national aviation authority to carry out commercial pilot operation for the category of 330-pound-plus air logistics uses.” It is intended to expand the trial to other sites as operational data and experience is accumulated.