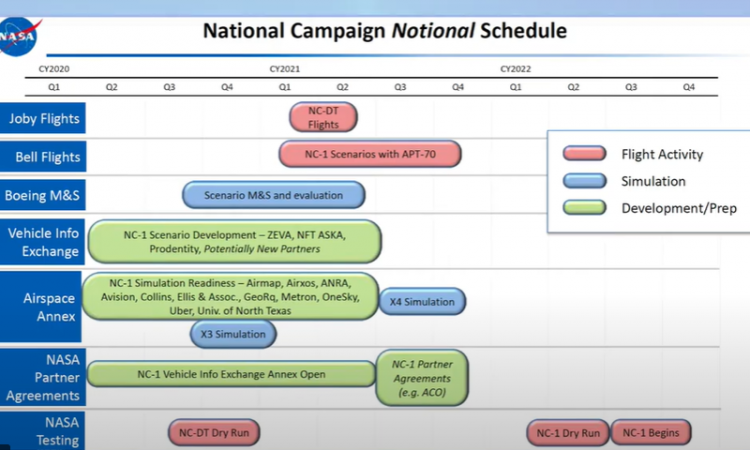 At the end of January 2021 NASA will announce details of the NC1 showcase trials with multiple partners which are planned for summer 2022.

NASA has broken down its AAM research areas for maturing autonomous flights over people into three areas: pilot, vehicle and Terpsters (flight route planning) and looking a different aspects of UAM from an “aviate, navigate and communicate perspective.” It will use surrogate helicopters to fly potential UAM routes, testing airspace management, communications, infrastructure and other challenges.

Aviation consultants Roland Berger announced a new market study at the FIA Connect event – more than 160,000 eVTOL aircraft will be flying passengers by 2050 in a market worth USD80 billion, with 10% the market dedicated to intra-city flights of 15-50 km, another 50% on airport shuttle services and 40% dedicated to intercity flights of up to 150 miles. In terms of autonomy, Jia Xu of Honeywell said the company’s vision was for cargo flights to be autonomous from day one.

Companies which did not raise capital before COVID-19 will find it more difficult to finance their projects than those who started beforehand, said Kirsten Bartok Touw of Air France Finance. UAM seems to be moving away from passengers and back into cargo, where it should be, she said. Some cities will have a need for air taxi operations as envisaged by Uber Elevate, but not all, said Michael J. Dyment of NEXA Advisors, LLC.  The company plans to make it first UAM infrastructure investment of USD50 to USD100 million this year or next. Over USD4 billion to USD5 billion needed by eVTOL platforms required to bring them to market they will also need to partner with larger companies to do this.

Brian Schettler of Boeing Horizon X, believed it will be seven to ten years to commercialise the UAM market – but also agreed that a combination of start-up innovators teamed with established players would be needed for companies to bring their products to market.

Edward Xu of Ehang said last year the company produced and delivered 61 autonomous air vehicles; the CAAC certified the company’s AAV for cargo deliveries in June and the company is now pushing ahead with passenger services certification.

Dr Eric Allison, Head of Uber Elevate said: all electric is the way to go – especially from the point of the infrastructure  where using electric will not mean having to store liquid fuel or get fuel to a fuelling point.