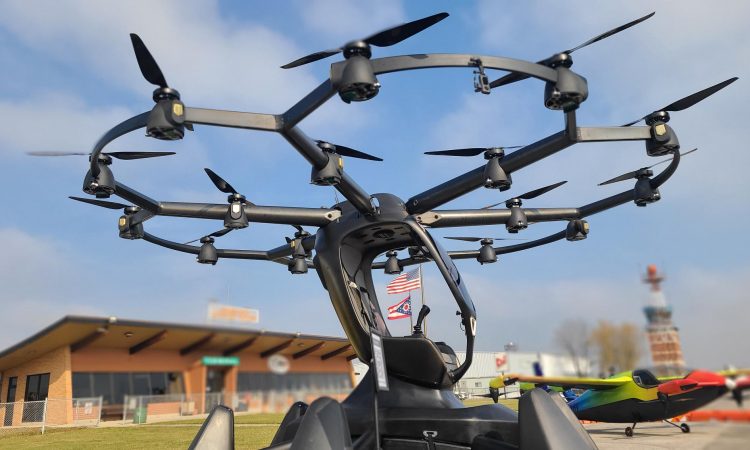 Springfield-Beckley Airport in Ohio, USA, on November 11 became the centre-piece of advanced air mobility demonstrations with the first public flights of electric vertical takeoff and landing (eVTOL) aircraft in the state.

According to a Drive Ohio press release:

“The focus of the showcase was to bring public aviation organizations, private aviation companies, corporate partners, and academic institutions together in Springfield, Ohio to highlight the advanced air mobility development ecosystem the FlyOhio team has built. Supported by unique partner relationships and infrastructure investments from the public and private sectors, Ohio is leading the 21st century air race.  FlyOhio’s work to refine low-altitude air traffic management seeks to make Ohio’s airspace among the first in the nation ready to fly beyond line of sight, ultimately bringing the use of unmanned aircraft for freight, package, and personal transportation closer to reality.

“We’re witnessing aviation history, to have built a coalition that includes the US Air Force, NASA, advanced air mobility developers and manufactures and corporate partners working with the Federal Aviation Administration, FlyOhio is building the next generation of air travel. In Ohio, we’re unlocking the skies for the aerospace age of the 21st century,” said Howard Wood, Executive Director of DriveOhio.

“Aviation leaders from across the private and public sectors were on hand to connect with state, local and corporate partners to showcase their electric vertical takeoff and landing aircraft and to highlight the infrastructure and development technology that is housed at Springfield-Beckley airport. Event participants included:

“The opportunity to build a new industry that has the potential to add $13 billion in market value to Ohio’s economy and support tens of thousands of new jobs in infrastructure, construction, advanced manufacturing and business development over the next 20 years doesn’t just happen,” said J.P. Nauseef, President and CEO of JobsOhio.