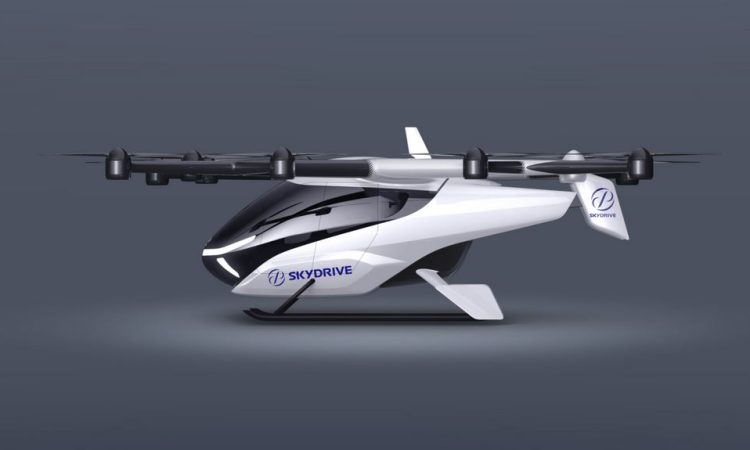 SkyDrive, developer and manufacturer of “flying cars” and cargo drones headquartered in Toyota City, Japan today unveiled the design of its commercial model flying car — the SkyDrive SD-05. SkyDrive says it is planning to use the SD-05, currently in development, to launch air taxi services in the Osaka Bay area during the world exposition scheduled for 2025 in Osaka, Japan.

“This is another big step towards the realization of flying cars and sky roads,” said Takumi Yamamoto, SkyDrive design director. “Two years have passed since the announcement of the SD-03, which successfully completed its public manned flight test in August 2020, and we are very happy to be able to announce its successor, the SD-05.”

In a press release the company says “The SD-05 is a two-seat, electric-powered compact aircraft with vertical takeoff and landing capabilities. Operated by a driver-pilot, its flight stability is secured with the assistance of a computer-controlled flight system. SkyDrive is developing flying cars with an eye toward realizing a world where they are used in daily life for air mobility much as automobiles are used for daily ground transportation.

“SkyDrive is in the process of acquiring a type certificate for the SD-05 from the Ministry of Land, Infrastructure, Transport and Tourism (MLIT), as the first of its kind in Japan. The company continues to work toward initiating practical use of flying cars during the World Exposition Osaka, Kansai scheduled for 2025 in Japan. The SD-05 is designed to travel up to approx. 10 km and the maximum cruise speed is 100 km/h. However, design and specifications are subject to change and the progress of design development.”