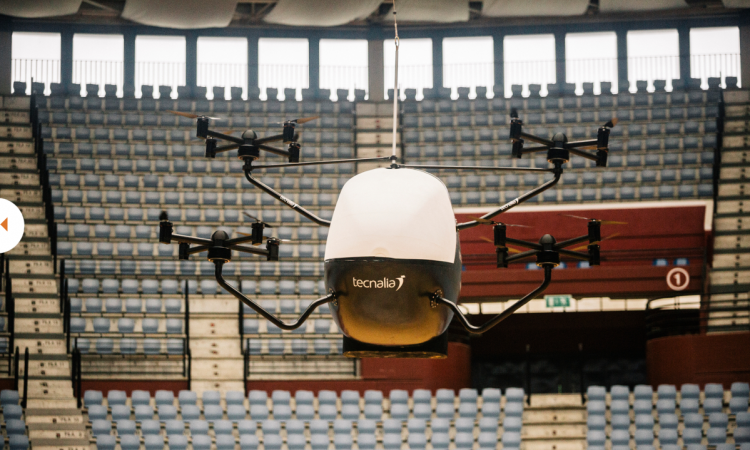 Spanish company, Tecnalia, has released footage of the third European air taxi and the country’s first. The manufacturer expects it to be on the market within five years.

The craft can carry up to  150 kilograms and travel in approximately 15 minutes urban distances of up to 15km at around 90km/h alternating between 100 and 300 meters.

The vehicle consists of an aerodynamic cabin of 1.8 by 2 meters with a door and window, in addition to four drones placed in the upper and lower part of the ship, which move the vehicle independently, but in  coordination with each other.

“The main novelty of the Tecnalia aircraft is that its architecture allows the cabin to maintain its own orientation regardless of speed, a clear advantage over conventional drones and current air taxi applications . This feature improves the flight experience, allowing a feeling similar to that of a car or a bus, from the dynamic point of view, ”said Joseba Lasa, one of the development managers.

Aerotaxi will have precise landing and take-off capabilities in confined spaces such as a parking space, and will withstand adverse environmental conditions, as well as minimize annoying air flow when taking off and landing.

“To drive the vehicle you will not need a prior learning process, since the system is autonomous, and the cost of the trip will be about tens of euros, about the same as a taxi,” said Agustín J. Sáenz, deputy director general of Tecnalia market.

In order to make aerotaxi a reality in the market in five years’ time, the makers are negotiating phase with different industrial partners for the development and industrialisation of the final product.

In addition, it is working with the different authorities involved in the legislative changes necessary to make it possible to travel in new vehicles called aerotaxi. Although there is still no regulation, to park the vehicle outside the city it is expected that heliports will have to be required. On the other hand, to park it in the same city, no ad hoc infrastructure would be needed .