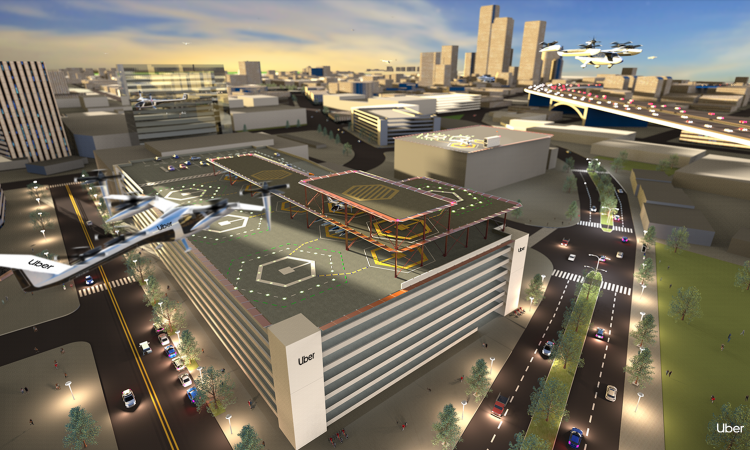 At the June 2019 Uber Elevate Summit in Washington, Melbourne was announced as the third city to join the Uber Air program and become part of the vision to bring this new transport option into reality by 2023. While there has been nothing new from Uber since then, the announcement on 8 September that it has appointed Natalie Malligan as Head of Uber Air for Australia suggests that the pace towards Australia’s first aerial ride-share service may be about to pick up.

Uber declined to be interviewed for this report but in a statement said: “As leader of the Uber Air Melbourne pilot, Natalie will be in charge of getting a fully scaled operation off the ground in partnership with the Victorian government, Melbourne Airport, federal aviation authorities and most importantly Melbourne communities.”

Currently around 3.8 million Australians are regular customers and now Uber says it wants to make aerial ride-sharing just as seamless a choice for them as cars, bikes or scooters.

There are three obvious but significant issues that need to be addressed before any trials can begin; aircraft certification, approval by the safety regulator and having somewhere to land and take-off.  These are the pieces of the puzzle that Uber needs to solve for the trials to happen next year but what progress is being made?

Australia’s aviation regulator, the Civil Aviation Safety Authority (CASA) is responsible for overseeing the entry of UAM to Australia and spokesperson Peter Gibson says that while the technology is new, the process of gaining operational approval is already in place.

“The approval process is the same as what we do for any new airline wanting to fly passengers and the objective is always the same,” he says. “That is to safely integrate the proposed service into the Australian aviation system.

“Uber has to document how they will meet all the relevant regulatory requirements and lodge an application for an approval. In a nutshell they have to be able to prove they can operate safely by identifying and managing all relevant risks.”

In broad terms, CASA will need to approve the overall operation, the key people, the traffic management system, how the airspace is accessed, aircraft maintenance, pilot licensing and the aircraft itself. “At one level it’s a small charter operation but at another level UAM in the future is forecast to do all sorts of things,” he explains. “Right now we have to look at what parts fall within current regulations and beyond that where do we look to make it fit.

“There are so many questions that need to be determined, even before a submission can be assessed and CASA has already had one set of meetings with Uber to assist them to scope and understand what’s required by us.

Aircraft certification is an obvious area of focus but Gibson believes the bulk of that process is likely to occur overseas with CASA then reviewing the data to make sure it meets local regulations.

“If Uber, or anyone else for that matter, bring an aircraft here for trials with FAA or EASA certification then we will review that to make sure it meets our requirements,” he says. “What usually happens is the applicant brings the manuals we need to see from their work with the FAA and we have a template here to put them into our format.”

Uber have selected six eVTOL manufacturers to work on their aircraft concepts, including aviation stalwarts such as Embraer, Boeing’s Aurora and Bell alongside a new start-up, Jaunt Air Mobility. Somewhat surprisingly there is no sign of two of the OEMs who seem closest to certification, Airbus and Volocopter, the latter now valued at around USD275 million and forecasting it will launch operations in two to three years.

Speaking about timeframes, Gibson said that in his experience the time needed depends heavily on the resources the applicant allocates to preparing the application. However he cautions: “This will be completely new territory and doesn’t fit neatly into what we have today for these applications, so it is likely it will take longer.

“If they do their initial trials in another location, such as the US, they could bring all their trial data and that will a good starting point for CASA to work from,” he says.

“We would be able to process the safety aspect of their application with a lot of the data that has already been collected and evaluated, which means a lot less assessment needs to be done by CASA compared to if the trials in Melbourne are starting from scratch.”

Clem Newton-Brown is the founder and CEO of Melbourne company Skyportz and was part of the Melbourne delegation that travelled to Washington for the Uber Elevate summit. With a strong involvement in the property industry, he has been developing interest in where the eVTOLs will be operating from. “Skyportz was part of the push to get Uber to Melbourne and it has become a platform for channelling interest into practical requirements for skyports,” he says. “The fact that Melbourne has been chosen has just turbocharged the interest and now there are property people who are coming to me who want information about this.

“People think it is real now; four months ago Uber had announced test cities in Dallas and Los Angeles but not many people in Melbourne had heard anything about urban air mobility, now in Melbourne everyone is thinking this is real.”

He believes that once an aircraft has been certified the process will literally take-off and that setting up a trial next year, say from the city centre to the airport, will be relatively straightforward.

The journey from the CBD to the airport is only 19 kilometres and yet in peak times it can take around an hour, so promoting a trip of just 10 minutes in an air-taxi is an enticing way to launch Uber Air in Australia.

“I think the first stage of the trial will be easily achieved and all that Uber needs is a certified aircraft as they can use the existing heliport and airport infrastructure,” he explains. “The really hard bit will be their vision of a ride-sharing service where you can be picked up or dropped off in multiple locations.”

He sees the difficulties in setting up skyports lie mainly in the area of government and town planning regulations, noise and sensitive use areas and gaining that all-important social licence for this type of transport.

“The Uber vision is dependent on massive changes in those policies and regulations which really requires big shifts in the community’s attitude,” he says. “That’s why it’s going to be a progression and when the initial trials happen people will see and hear the aircraft and that’s the step that has to be taken to get it started.”

He says that part of that shift is for regulators to recognise that e-VTOLs are not helicopters and that if the regulations that apply to helipads remain then UAM networks will not get off the ground in Melbourne.

“If all the rules for helicopters remain and people think they are too noisy, like helicopters, this is not going to happen,” he says. “People need to see it, hear it and accept it and then rules will need to change to accommodate eVTOLs.”

When asked about the progress since the June announcement, Newton-Brown said he is pushing ahead with his own plans to develop a network of skyports for the UAM industry as a whole, not just as part of the Uber project.

“There is a lot of interest in it and we are channelling that into some tangible assets in the next year or two so that those first-movers will be part of the system when it begins,” he says. “We’re preparing the landscape for air-taxis to happen in Melbourne.

While Uber Air is generating the excitement now, it is important to keep in mind that UAM is more than just Uber. This project in Melbourne will develop the framework for all UAM participants and likely ensure that the city remains at the forefront of this transport revolution.