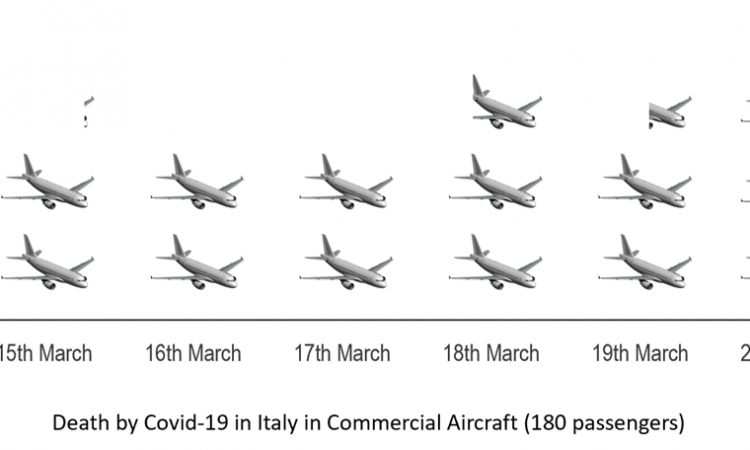 Manu Lubrano, Ph.D, CEO and Co-Founder, INVOLI AG (expressed opinions are my own)

My grandpa fought the Second World War. He was part of the Italian resistance movement but he was not a soldier, he was just one of many regular people. Still, he was imprisoned in an internment camp, but he made it home at last.

The Second World War was the fight of the regular people of his generation. The fight of my generation’s regular people consists of avoiding contagion by staying on the couch, watching as much Netflix as possible and resisting the impulse of compulsively buying toilet paper. Also, we are getting fat. Extra-fat. Pretty nice fight, huh?

I hate this situation, because I want to do something but actually, “doing nothing” is the real good thing to do. But still, I can’t watch indifferently many grandparents of Italy dying defenselessly, grandparents that fought for our country, while I binge watch for the fourth time Breaking Bad. I know I am talking a lot about Italy, but this applies to any other country living the Covid-19 emergency.

In this fight against such a powerful invisible enemy, there is still so much we can do. The only way “non-medical” people have to support who is fighting this war on the front line is having effective confinement: “Stay home!”

While technology is perfectly entertaining us at home, there is still so much it can do to help us win.

Drone delivery could improve substantially the situation, by providing medicines, goods and so on to the people that cannot or should not move from their home. The exchange of viruses and thus the propagation of Covid-19 could be strongly limited. Remember, our enemy acts “exponentially”: we need great means to fight it. Any.

Drone delivery tech is already available today, but, there is still a big blockage point that doesn’t allow its usage: regulation.

Civil aviation regulators around the world have not figured out yet completely the legal framework to integrate drones into the air traffic. They claim that drones have the potential of being very dangerous for the current air traffic. True, I know. In the meantime, drones are not anymore an unknown technology, including for regulators. Drones are here to stay, and that is a fact. Also, the industry has already brought on the table all technology to safely integrate them into the air traffic (UTM, U-Space, deconfliction, and so on). There have been several technical demonstrations around the world, also companies that are already providing drone delivery commercially, saving lives today (Zipline, Matternet, and so on…), thanks to regulators that have demonstrated more flexibility (Switzerland, Rwanda, and so on…).

Unfortunately, these remain exceptions. We can all agree that drone delivery is not yet here today because of the speed of our regulators, for the too much talking, for the not converging, for the lack of flexibility, for the willingness of doing “the same law in every country from day zero”, for the hopeless research of a “technology that will solve all the problems”. Compromises have to be done.

Interestingly, regulators can also be extremely fast and reactive. Every time there is a major commercial aircraft crash, for a cause that was not foreseen, regulators can run and change laws “almost instantaneously”, worldwide. We all remember how fast measures were taken after 9/11, or after the crash of the Germanwings, or after the crash of the two 737 MAX, to cite some examples.

Maybe this is the key to speed up things?

So let’s see things this way. Today is the 21st of March 2020. Below, a graph showing the death toll in Italy in the last week due to Covid-19, but in “number of commercial aircraft” (I’m considering, for example, a standard commercial aircraft with 180 passengers), instead of number of people:

From the beginning of the epidemic, we have today 4.035 deaths, corresponding to 22 commercial aircraft, only in Italy. I am scared while I am writing this down. It is huge.

Drone delivery together with confinement has enormous potential to decrease the spreading of the virus. Remember this fight is exponential. Infected people are both victims and the virus’s army. Every non-infected counts.

The potential of this technology is so massive and the situation is so bad, that even in the remote possibility that a drone hurts somebody, the balance is still totally in favor of using it.

I feel so bad that this tech is not available for everybody already today, and even if drone delivery is unblocked now, we will need some time to set things up.

The time to act is now, do it for all the grandpas of Italy and all over the world, that fought for us.