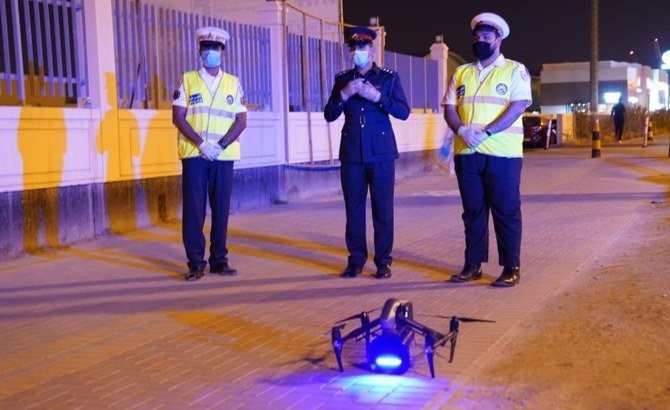 Bahrain has deployed a multilingual drone to promote traffic safety as part of an awareness campaign, reports arabnews.com. The campaign, being carried out by the General Directorate of Traffic, includes safety procedures on walking and riding bicycles, and also highlights wrong parking manoeuvres.

The traffic safety campaign also urged people to follow government measures to help combat the spread of coronavirus. During the pandemic, drones equipped with loudspeakers are being used across the capital to enforce social distancing measures. Police personnel are deploying drones in heavily populated areas in Manama to ensure people abide by a ban on public gatherings of more than five people.

The other measures include wearing face masks in public, staying home unless necessary, and limiting Ramadan activities (which ends on May 23rd) such as public iftar gatherings and majlises. Ghabgas, mass iftars, distributing iftar packets on roads and setting up donation kiosks in public places have also been banned throughout the holy month.

In a segment that aired on Bahrain Television police were shown using drones to ensure full compliance with the wide range of measures including community policewomen stopping a female shopper and asking her to wear gloves before entering a supermarket whilst maintaining a proper distance.

Stores and facilities are regularly and thoroughly disinfected in accordance with the Health Ministry’s guidelines and appropriate space is marked on the floor to maintain social distancing. Cinemas, gyms and salons will remain closed, while sheesha and general cafes as well as restaurants are limited to take out and delivery services.