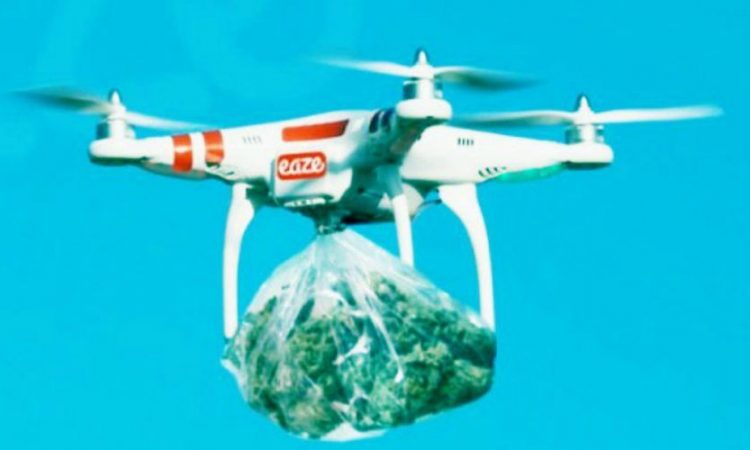 Late on the night of April 24, 2015, 19-year-old Brayan Valle stood in a farm field half a mile north of the Mexico border near Calexico, California, reports airspacemag.com. When a drone launched in Mexico buzzed out of the darkness, Valle used a radio controller to command the commercial-grade, multirotor aircraft to drop a seven-pound bundle enclosed in bubble wrap. As Valle collected the bundle, the drone flew back to Mexico.

In a process that took hours to complete, the Mexican drone returned three times to drop additional seven-pound bundles. With the fourth and final bundle stuffed inside a backpack, Valle walked up to Highway 98, where he flagged down his new friend, 18-year-old Jonathan Elias. Throwing the backpack into the trunk of Elias’ car, Valle hopped in the front seat and the pair drove off. Neither of them knew that U.S. Customs and Border Protection (CBP) agents had picked them up on a remote camera. When CBP agents stopped and searched their car, they found 28.55 pounds of heroin, worth nearly USD1.5 million. Although the teens went to prison, the drone and its Mexico-side pilot made a clean getaway. Valle and Elias were convicted in the country’s first seizure of a narcodrone, an uncrewed vehicle transporting illegal drugs from Mexico to the United States.

The typical narcodrone is small and inexpensive, like the quadcopters available at Best Buy and Walmart for a few hundred dollars, but some unpiloted aerial smugglers are six- and eight-motor aircraft, like those used in Hollywood filmmaking, and can cost more than USD5,000 and carry up to 35 pounds. Nobody knows how many narcodrones cross the border each day, and nobody knows how to stop them from coming.

Tim Bennett is the program manager for air domain awareness at the Department of Homeland Security’s Science and Technology Directorate. His job is devoted to detecting, tracking, and countering drones. Narcodrones, he says, are “a new big problem that we all have to address. It isn’t just the DHS (Department of Homeland Security). It’s across all agencies in our government and all governments in the world.”

During the 1980s, small, private airplanes loaded with cocaine or marijuana became notorious for flying under the radar over the Gulf of Mexico and the Mexican border. Then, Colombian cartels aka the Cocaine Cowboys dominated the drug business. After constant pressure and take down from law and enforcement such routes were stopped. New cartels then used human mules, semi-submersible boats and even air-conditioned tunnels, some several miles long, but these often required major investments in technology and time to become operational.

By comparison, the USD5,000 for a drone is pocket change in the drug-running world, and a drone reveals nothing without sophisticated forensics.

Aerial smuggling might be as old as airplanes, but it wasn’t until 2013, when the Chinese firm DJI released their first consumer drone, the Phantom quadcopter, that the new threat took off. Because the DJI drones were inexpensive and easy to fly, not long after their appearance, reports began to appear in the press of their use to carry cellphones and small quantities of drugs across fences into prison yards. Border authorities, however, were unconcerned with the trend: The drones were too small to carry a significant payload.

But in January 2015, when a commercial-grade drone loaded with drugs fell out of the night sky in Tijuana, the narcodrone picture took on a new focus. The DJI Spreading Wings S-900 hexacopter, designed for professional photography and filmmaking, crashed in a Tijuana grocery store parking lot, just across the border from the California town of San Ysidro. Mexican police recovered more than six pounds of methamphetamine with a street value approaching USD43,000. Four months later, Valle and Elias were caught.

In 2017, the Customs and Border Protection (CBP) heard a drone fly overhead as it crossed the border fence near San Ysidro and tracked it to a residential neighbourhood. Agents captured 25-year-old Jorge Edwin Rivera with 13 pounds of methamphetamine. Rivera’s drone, found hidden under a bush, was a USD5,000 DJI Matrice 600; the Matrice is DJI’s largest drone, and the package Rivera collected carried its maximum payload. He told investigators that prior to his arrest he had been involved in five or six other deliveries over the previous six months. Rivera received a 12-year prison sentence. Despite these incidents, officials say they can only guess at the scale of narcodrone activity.

Robi Sen has been working along the border with federal officials since 2006, and currently works as an artificial intelligence and autonomy consultant for government and commercial clients. “We have a lot of physical evidence and proof that there are a lot of these drug flights with drones,” says Sen. “But because of the lack of a methodology, and a lack of sensors and trained observers, we cannot know how big the problem is. But what things we have seen suggests that the problem is much larger than anybody realizes.” Some experts have even suggested that as many as a thousand drones could cross the border each week, but this figure is more guess-work.

CBP headquarters recorded 170 reported incidents over the past five years, but the border patrol did not disclose how many drones had been recovered or seized, how many incidents resulted in arrests and convictions, the type and quantity of drugs recovered, where the incidents took place, and what type of drones were involved.

Of the recorded incidents, at least 84 occurred during 2018 and 2019. According to multiple sources who have worked with recovered narcodrones, data from just one aircraft has revealed hundreds of cross-border flights. In other words, just one narcodrone could have flown more border crossings than all the incidents CBP has acknowledged.

Jim Reed is the director and special agent in charge at the U.S. Drug Enforcement Administration’s El Paso Intelligence Center (EPIC), an operation that draws upon 21 different government agencies to focus on threats in the western hemisphere, in particular, along the U.S. southwest border. He’s a 30-year DEA veteran who has been living and working along the border since 2015. Narcodrones, says Reed, “are so hard to track I don’t think anybody can give a good, solid number” of how many are crossing the border.

Even as law enforcement comes to grips with the existence of narcodrones, smugglers are becoming more sophisticated. According to one source, who asked to speak off the record in order to discuss sensitive information, adversaries are using decoy drones that act as a diversion, drawing CBP agents to a fake drop-site, while another narcodrone safely makes the actual drop elsewhere.

Just as alarming, press reports indicate the appearance of fixed-wing narcodrones, which can carry more, fly farther, and move faster than their rotary-wing counterparts. In 2016, a disassembled fixed-wing drone was found buried on a Colombian beach along with 286.6 pounds of cocaine. Police said the aircraft could move as much as 22 pounds of cocaine as far as 62 miles. In Mexico, the cartels are said to have experimented with imported fixed-wing drones, and, according to a 2014 report in the Mexican newspaper El Universal, have begun building their own.

When the Cocaine Cowboys were a problem back in the 1980s, the US Air Force established a string of look-down radars and hung them in the sky from tethered balloons along the border. Known today as the Tethered Aerostat Radar System (TARS), the balloon-based radars stretch from the Florida Keys to the Texas coast and into California. TARS proved so effective at detecting low fliers that it helped cut the number of illegal piloted aircraft flights from a high of 8,500 per year to fewer than 50, according to a CBP publication. But even TARS is challenged by low-flying drones. For these radars are primarily designed to track high-speed aircraft at high altitude. When it comes to narcodrones, those radars are largely ineffective.

TARS and the other AMOC radars operate in L- and S-band frequencies, with wavelengths ideal for detecting small airplanes, but too large to see small drones. But new radars specifically designed for small drones, that operate in the higher frequencies of the X-band, are becoming available. Although they have shorter range than AMOC radars, they are highly mobile and can be deployed from vehicles as well as permanent positions.

But radar waves reflect badly off objects not made of metal. David Kovar, who has worked in digital forensics and cybersecurity since the 1990s, has helped establish the field of drone forensics, explained: “The problem we’re finding with radar, is that as new composite materials are coming along, you can replace a lot of metallic components so the radar cross-section is being diminished.”

Software filters also prevent drones from appearing on radar screens: their size, speed, and altitude make them look like birds, which radars are programmed to ignore.

Radars aside, one of the best methods to spot drones involves detecting the radio transmissions that control a drone and the video transmissions sent back to the pilot. These transmissions can be used to locate the pilot and to track the aircraft, but many drones can fly autonomously using GPS waypoint navigation, so there may be no control signal to track.

Drones also have a distinctive sound, and in quiet areas, acoustic systems can be effective. In urban environments, however—where the known narcodrones were discovered—the omnipresent sounds of city life limit the effectiveness of acoustic detection. The same is true for seismic detectors than can pick up the minute vibrations of a passing drone. Despite limitations, existing radar systems are still the best option.

So now that narcodrones are an acknowledged threat, what are authorities going to do about them?

According to Department of Homeland Security’s Tim Bennett, one government group is particularly focused on drone detection and counter-drone technologies: the Joint Improvised-Threat Defeat Organization, better known as JIDO. “They’re the ones who are pretty much organizing all the discussions,” says Bennett.

One way to stop a drone is an electronic attack on a drone’s radio communications, which are in the frequency bands for WiFi. But current federal laws prevent signal jamming because of the impact it may have on civilian communications. For the same reason, jamming and spoofing Global Positioning System (GPS) signals are off the table because those signals are ubiquitous in everyday life. Attacking GPS in an urban environment would impede first responders, delivery trucks, and construction crews—to name a few of the groups who would be affected—and would compromise the safety of piloted aircraft, especially airliners.

Stopping a drone in a combat zone is less complicated because there are no such legal restrictions. Lasers, anti-aircraft weaponry, jamming, spoofing, chip-frying microwaves, nets, and kamikaze drones are valid weapons for the military. None of those are options along the border, where an uncontrolled narcodrone crash could have disastrous consequences.

“You just don’t know what they’re carrying in these things,” says DEA’s Reed. Using one kilo of fentanyl as an example, he says, “When you do the math on that, you’re looking at between 200,000 and 500,000 people that one kilogram could overdose or kill. If something like that would fall through the sky in an urban area, it would be a catastrophe.”

“There are currently no approved [drone] mitigation countermeasures,” says a CBP spokesperson, but in September 2019, CBP announced the purchase of six of Citadel Defense’s Titan counter-drone systems, which detect and attack drones’ radio-frequency communications, for operational testing along the border in California, Arizona, and Texas.

Testing has not yet begun, but the CBP spokesperson says that the agency hopes to start this in the summer. The jammers are merely the latest step in the evolving battle between smugglers and the law.