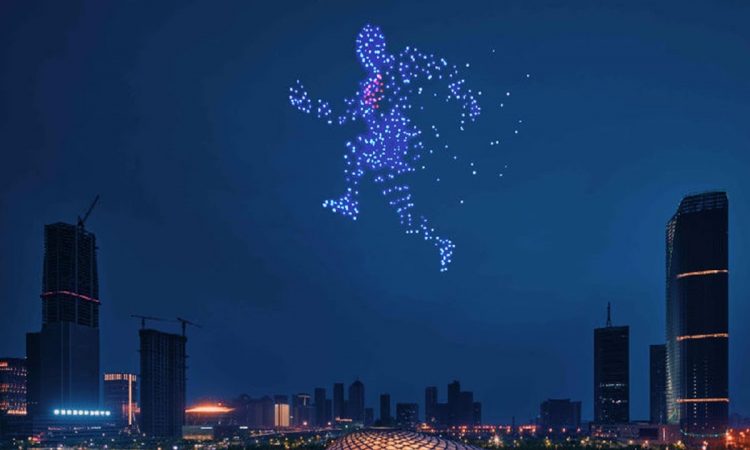 Spectacular drone light shows are on the increase around the world as the number of craft used escalate and the different images portrayed in the sky become more complex.

innovationorigins.com reports that scientists from the University of Zurich now go one step further and allow drones to perform acrobatic manoeuvres independently thanks to a navigation algorithm. They use simulations to train the autonomous aircraft, making them faster, more agile, and more efficient. This can be useful in rescue operations or even for delivery services.

Together with microprocessor manufacturer Intel, the research team has built a quadrocopter that can learn to fly autonomous acrobatic figures. Although a “power loop” or a “matty flip” is probably not necessary in a conventional drone mission, a drone capable of performing these acrobatic movements could be much more efficient, the scientists emphasise. They can go to their physical limits, make full use of their manoeuvrability and speed and cover longer distances within the range of their battery.

Using the newly developed navigation algorithm, a drone equipped only with on-board sensors and calculations can independently perform various flight manoeuvres. To prove that this algorithm works, the drones flew with different elements such as “Power Loop”, “Barrel Roll” and “Matty Flip”. During all these movements, the aircraft has to withstand very high thrust and extreme angular accelerations. “With this navigation, we have reached a new stage in the integration of autonomous drones in our daily lives,” says Davide Scaramuzza, Professor and Director of the Group for Robotics and Perception at the University of Zurich.

The core of the new algorithm is an artificial neural network “that directly converts the inputs provided by the built-in camera and inertial sensors into control commands”. This neural network is trained by simulating acrobatic manoeuvres. According to the researchers, this has several advantages. The actions can easily be simulated using reference trajectories and no expensive physical test drives are required. Moreover, the training can easily be scaled and there is no risk for the quadrocopter itself.

“Our algorithm teaches us to fly acrobatic manoeuvres with an accuracy comparable to that of professional human pilots,” continues Scaramuzza. “That’s why only a few hours of simulation training are needed to get the quadrocopter ready for use.” Therefore, there is no need for further refinement with real data because the algorithm transfers the learned input from the simulations to the physical world.

Nevertheless, the researchers admit that humans still have an advantage over drones. “They can quickly interpret unexpected situations and changes in the environment and adapt more quickly,” emphasises Scaramuzza. But he is certain that drones “benefit from being able to travel large distances quickly and efficiently during search and rescue operations or for delivery services”.