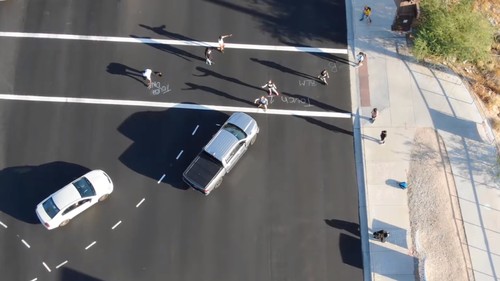 Protestors around America have been subject to unprecedented aerial surveillance during the last month, reports vice.com. For example, police in Tempe, Arizona used drone surveillance footage for the arrest of three demonstrators last weekend. Police allege that three people stopped traffic during a demonstration outside a Barnes & Noble bookstore.

Arizona activists organised a “chalk walk” over the weekend where protesters would gather to write on sidewalks in chalk to declare their support for the racial justice movement. Police took three people into custody, alleging that two had damaged a passing car and a third had prevented the police from making an arrest.

While various police departments have their own drones, there have been very few unmanned craft-aided arrests in the US. So far, drones have largely been used for search-and-rescue operations by police and fire departments. The first known examples where a drone led to arrests both occurred in North Dakota.

In 2012, Rodney Brossart was surveilled using a Department of Homeland Security Predator drone and was then raided by police. In 2014, North Dakota police used a smaller drone to track down four DUI suspects when they ran through a cornfield.

“During the protest numerous demonstrators were observed blocking the roadway at McClintock Dr, as patrons attempted to exit the Tempe Marketplace,” the Tempe PD press release said. “Two of the protesters (a male and a female), began physically striking and throwing items at the victim’s vehicle causing noticeable damage.”

According to demonstrators, a grey truck advanced through the crosswalk while laying on its horn and attempted to run down a protester on the road at low speed. The drone footage released by the Tempe PD does not include sound.

The film does not show the arrest either. “We are still sorting through body cam footage right now,” a Tempe PD spokesperson told VICE over the phone. “It’s a ton of footage to go through. We’ll start releasing information throughout the week.”