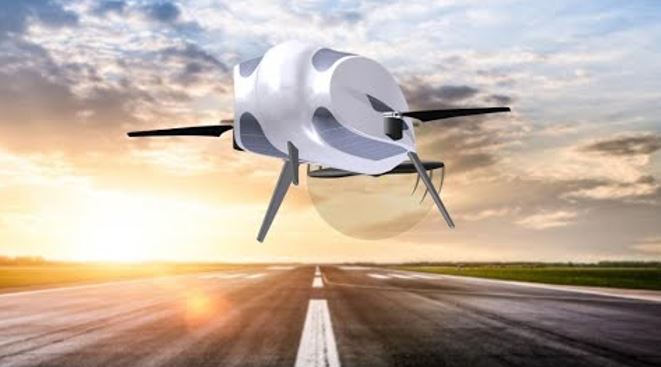 “If our lab testing continues on its current trajectory,” Cary Zachary, the company’s President says, “we believe our [hemi-rotor configured] prototype will boast the most efficient hover and forward flight profile of any rotor-borne VTOL aircraft.”

In a press release the company reports “Blainjett is applying the hemi-rotor concept to a subscale drone as part of a path to demonstrating that the configuration can scale to larger unmanned or manned aircraft in eVTOL applications from package delivery and cargo to transport and tactical military roles.

“Blainjett’s “hemi-rotor” design situates familiar vertical lift rotors (as seen on helicopters, UAM or drone aircraft) partially inside opposite sides of an enclosed fuselage. The airfoil-shaped fuselage also houses a pair of electric motors to drive the lift-rotors. A third motor situated in the empennage above an inverted V-tail powers a pusher prop.

“The concept hinges on isolating the retreating rotor blades from the advancing blades, in effect neutralizing the retreating rotors. In a hover, conventional open-rotors generate an even amount of lift all the way around. But when a traditional rotorcraft flies forward, its rotor blades both advance forward into the relative wind and retreat from it during rotation. This yields a dissymmetry of lift on opposing sides of the rotor arc, eventually creating a hard speed limit.

“Blainjett solves the problem by enclosing the inner half of each rotor disc within the aircraft fuselage. The fuselage incorporates an inner “hover door” and a series of top and bottom vents to facilitate pitch and yaw control (and relieve internal aerodynamic pressure) while in hover. Roll control is affected by power inputs to the mid-fuselage lift-rotors.”

As V2 testing of the hemi-drone prototype moves forward, Blainjett says it is seeking potential manufacturing partners to help scale the concept and validate design IP.