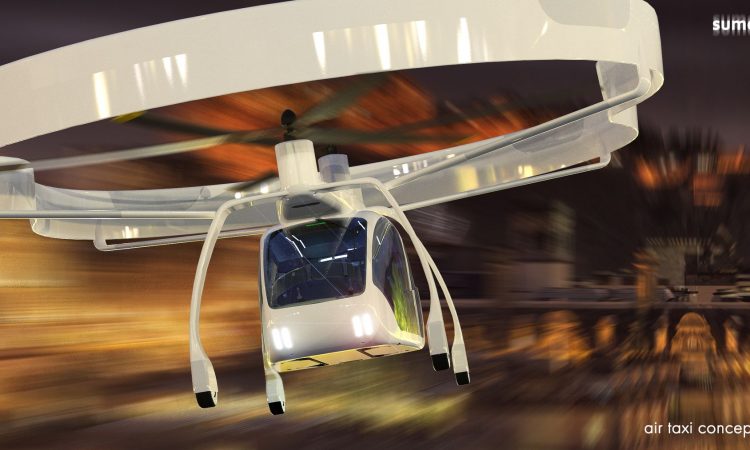 UAVOS, the global unmanned aerial, ground and surface solutions company with operations in commercial, industrial and defense markets, presents its new air taxi SumoAir as an independent-controlling concept for vertical e-mobility, according to a company press release. The all-electric, tandem rotor helicopter consists of a four-seat passenger section plus a pilot cabin that can be attached to either a car or a flight module.

The helicopter will be operated both manually and autonomously. The project is a part of UAVOS’ research and development enterprise to explore and understand the fundamental technologies behind electric aircraft and the urban air mobility (UAM) market.

The SumoAir unmanned helicopter has a tandem rotor configuration with two large horizontal rotors mounted one in front of the other. The urban aerial vehicle (UAV) features two redundant high-lift propulsion units. Their three-bladed rotors are driven by two electric motors at around 520 rpm to ensure a low auditory sound. UAVOS’ air taxi concept has additional safety advantages such as autorotation flight and landing capability. SumoAir hopes to achieve a cruise speed of around 140 km/h with a flying limitation of over 1 hour. The passengers will be able to cruise at altitudes as high as 2,500 metres. UAVOS designed the concept air taxi that measures 11.5 metres in length and 7.5 metres in width to carry up to 1,680 kg in weight. Its advanced airframe uses two main three-bladed rotors with a diameter of 7 metres.

Aliaksei Stratsilatau, UAVOS’s CEO and Lead Developer, said, “By 2030, 43 cities will be home to over 10 million people. In congested cities such as Los Angeles and Moscow, commuters spend nearly 100 hours a year in traffic jams. We expect, coupled with ridesharing, autonomous flying will ease the traffic burden on city roads.”

Today UAVOS employs more than 90 people around the world with offices in Hong Kong, Silicon Valley and Switzerland.