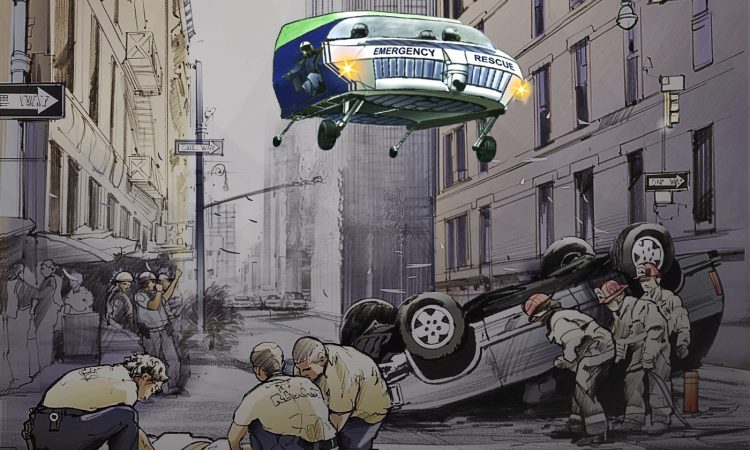 Israel’s Urban Aeronautics announced this week it has signed a MOU with U.S. based Hatzolah Air to develop its CityHawk VTOL aircraft for emergency medical services (EMS) use, reports eVTOL.com.

The six-seat CityHawk creation is based around Urban Aeronautics’ Fancraft technology, which is already employed in its Cormorant UAV prototype, aimed at military applications. The present CityHawk design relies on hybrid propulsion, but Urban Aeronautics recently announced an agreement with HyPoint to explore development of an advanced version powered by its hydrogen fuel cell stack technology.

Urban Aeronautics CEO Rafi Yoeli, said, “The emergency medical services (EMS) CityHawk compact size will enable it to land in the middle of a busy city street, making the craft a perfect fit for medical evacuation missions by decreasing the time it takes to arrive on-scene, treat and transport sick or injured patients to medical facilities.”

Hatzolah Air is the aviation division of Hatzolah, an EMS organisation founded more than 50 years ago with locations around the world. It operates as a charitable organisation.

According to a company press release, Urban Aeronautics’ engineers will work closely with Hatzolah’s experts to tailor the CityHawk to their operational requirements. The aircraft will accommodate a pilot, patient, companion, two medical personnel, and a complete package of life support equipment.

Hatzolah Air will also be leading the marketing of CityHawk to other EMS and rescue organisations worldwide under a distribution agreement with Urban Aeronautics.

Hatzolah Air president Eli Rowe, commented, “We foresee a potential market of at least 800 CityHawks for Hatzolah and other EMS operators, with the possibility to save thousands of lives each year.”

The agreement is being supported by one of Urban Aeronautics largest investors, Besadno Group, an Israeli-American investment firm.