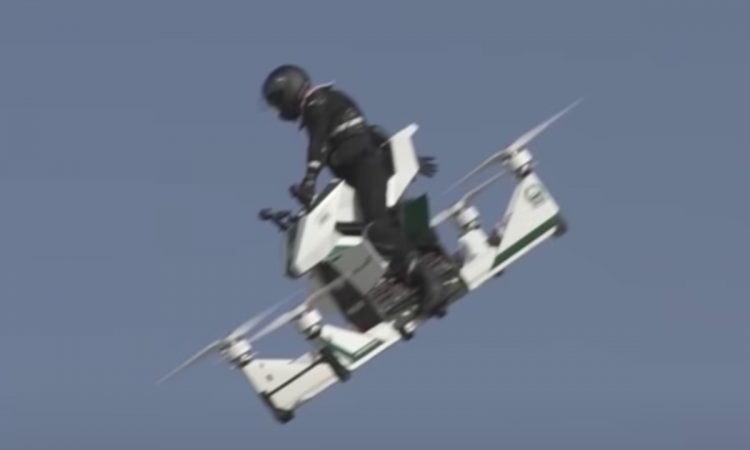 When newatlas.com first saw the Russian Hoversurf Scorpion Flying Motorcycle, the website thought it was “just the vehicle for aspiring amputees.” Four exposed propellers spinning dangerously close to the rider’s limbs made the site cringe, and they wondered how much would be left of the pilot in a crash.

Yet, the Moscow-based creators of this mad machine, however, threw themselves into testing and demonstration flights with extraordinary bravado, doing manned flights over concrete at altitudes nobody could expect to survive a fall from, a dirt bike helmet and armour their only protection.

When the Dubai police force then signed a deal  to start testing and demonstrating these bikes, the website called it “100 percent a publicity stunt, and probably quite a dangerous one.” The mere thought of flying one of these early prototypes near people struck them as a huge safety risk.

And now there is recent footage of a crash. In a secluded test area, a Scorpion pilot takes off and rapidly accelerates to an altitude of around 30m at which point, according to Hoversurf, a barometer fails and the bike begins pitching wildly back and forth like a mechanical bull in the sky.

The pilot immediately begins to descend, but the aircraft’s flight controller can’t seem to decide where horizontal is, and it bucks again, out of control as it comes down, eventually crash-landing on the two rear props before flipping over backwards on top of the rider, with the front two props still spinning.

The pilot manages to escape injury, but the hoverbike is toast. Hoversurf’s description on the Youtube video: “The barometer in Dubai refused and an accident occurred – a down from a height of 30 meters. All safety systems worked well, and the pilot was not injured. Safety is our main concern. It is thanks to such incidents that our designs are becoming more safe.”

Yet, this was a very lucky crash say newatlas.com – not just for Hoversurf and the pilot, but for the entire eVTOL industry. The website comments, “We admire the cojones it takes to be a personal flight pioneer in this emerging space, but there’s a reason most manned tests are done over water or on tethers. We’re just as keen as anyone to see manned multirotors hit the skies, but these brave pilots have families, and rushing ahead of safety guidelines could set the whole space back if it ends in disaster.” Adding, “Please take care, guys.”

PS: Hoversurf will sell you a Scorpion Hoverbike for USD150,000!

Watch the video: (Scroll half-way down)