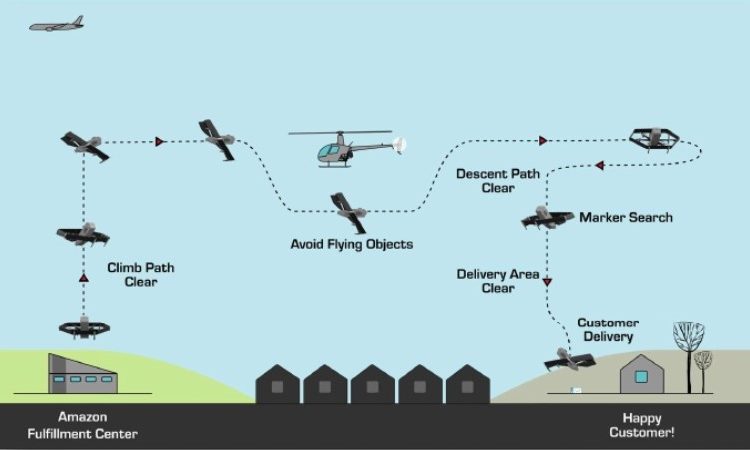 Amazon Prime Air’s autonomous drones will include a “fail-safe design architecture” equal to human control – and humans will not be able to intervene if a mission is aborted due to disruption at the delivery site, the company has stated.

“Prime Air is confident our autonomous systems will achieve demonstrable levels of safety and reliability equivalent to operations that currently rely on certificated airmen with manned flight experience,” wrote Sean Cassidy, the company’s Director of Safety and Regulatory matters in a letter to the FAA.

The letter contains requests for exemptions from federal law and regulations including gaining permission to fly Prime Air drones for package delivery before receiving an “airworthiness certificate.”

Packages would be delivered within 30 minutes after the customer placed  the order, with a range of 8.5 miles from the Amazon fulfillment center that deployed it.

Although an operation with an FAA airman certificate and a class III medical certificate will be able to recall the drone, Amazon claims the drones will be able to maneuver around flying objects using onboard sensors – and even land itself if it goes out of communication range.

“The MK27 is designed to perform an automated response maneuver to ensure separation from other aircraft and objects and that a safe landing will occur without the need for any operator intervention in the highly unlikely event of a complete lost link situation,” per the letter. “The MK27 is independently safe in that regard.”

If the MK27 sees something in the delivery area onto which it is about to drop the package, such as a person or a pet, it may return to base without delivering.

“Our system is designed with default fail-safe logic to abort the delivery if an obstruction is detected,” Cassidy wrote.

And once the drone decides to cancel, Prime employees would be unable to override the system. wouldn’t be able to make the drone deliver the package even if they wanted to.

Prime Air will fly the drone during the day at a maximum of 400 feet avoiding hospitals, “sensitive government facilities” and football stadiums or any sporting event. It will remain grounded if winds read above 24 knots or under “icing conditions.”

The drone has completed more than 10,000 “real-world datasets accomplished via flights in representative backyard locations.” The hardware has gone through some 15,000 simulated tests, and the software more than 250,000, the letter said.