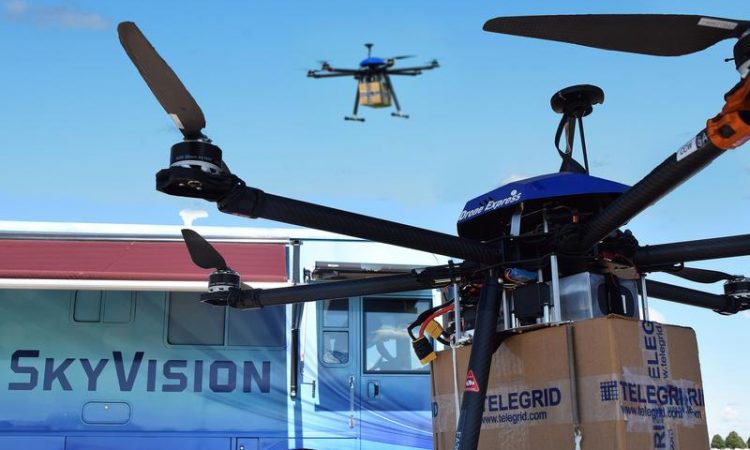 A New Jersey high-tech logistics company, with the aim to deliver grocery and drug store items to consumers via drone, is trialing “a unique kind of radar system” in Springfield, Ohio, for Beyond Visual Line of Sight (BVLOS), reports wvxu.org.

Drone Express, a division of Telegrid, and a member of the FAA administration UAS integration pilot program (IPP), says it wants to deliver small packages using its own designed autonomous drones.

Company engineer, Beth Flippo, moved her family to Liberty Township for the summer to conduct tests at the Springfield Beckley airport. She said, “We wanted to fly with SkyVision radar and the ecosystem Springfield has is ideal.” The radar allows unmanned aircraft systems to detect and avoid other aircraft while in flight, where the drone air traffic controller sits in a recreational vehicle. Drone Express is one of the first commercial companies to trial at Springfield. The State of Ohio is looking to attract businesses to test at the site. Mitch Heaton, who now works for Drone Express, but used to be with the Dayton Development Coalition, said, “We’ve been working on this radar system for around eight years, but only last year was it ready to go live.”

Flippo says the hope is that the drones will deliver to your phone’s GPS location in 15-30 minutes. She suggests examples like ice cream late at night or Tylenol for a headache at work. Flippo points out that Drone Express will not be competing with the likes of Amazon, but instead will offer the “brick-and-mortar stores” an opportunity to deliver their goods.

The company is awaiting for a couple of FAA certificates to allow the company to fly BVLOS by the end of this year.