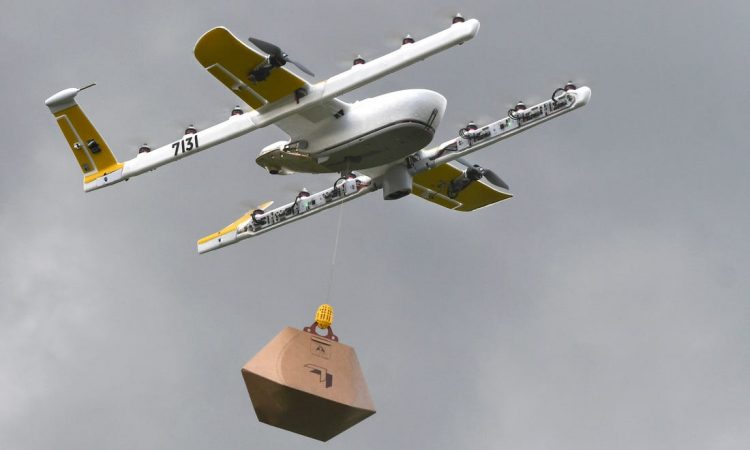 Wing drones, a subsidiary of Google’s parent company Alphabet, have seen deliveries soar around the world during the pandemic with an average 500% volume increase.

In Australia, for example, where Wing first launched in Canberra during 2019, Maria Catanzariti Wing Communications spokeswoman, told Business Insider Australia via email. “We saw the number of deliveries double from February to March, then again from March to April, including many thousands of deliveries in Australia.”

Wing has delivery sites in Canberra, Logan and Queensland as well as Virginia in the US and Helsinki in Finland. And its received an approximate 350% increase month on month in sign-ups to its service too.

In Australia, Wing delivers items from 24 businesses – 16 in Canberra and 8 in Logan. These include retailers such as Wokitup!, Kickstart Expresso and Sushi Hub. In Canberra it works across the suburbs of Crace, Palmerston, Harrison and Franklin in the Gungahlin community. While in South East Queensland, it operates across the suburbs of Crestmead and Marsden in Logan.

Some of the most popular items delivered by drone include coffee, fresh bread, and household groceries like milk, eggs, and toilet paper – as well as hot roast chickens and sushi. Deliveries are made via the Wing app. Once you place an order, a drone picks up the package at Wing’s delivery facility then – at its flight altitude – it heads to its destination.

Once it gets to the destination, the drone slows down, hovers and drops to 7 meters above the ground. It then lowers the package to the ground by a tether and releases it in the selected delivery area – whether that’s a front yard or back yard. The drone doesn’t land and there is no need for you to unclip it or help with the delivery. When it’s done, it just goes back to its cruise height and returns to Wing’s site.

The drones have a wingspan of 1 metre, weigh roughly 4.8kg and can carry packages of around 1.5kg. They can reach speeds of up to 113km/h and their fastest delivery time to date has been 2mins and 47 seconds.