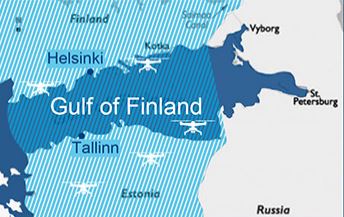 The SESAR JU reports that the Gulf of Finland (GOF) U-space demonstration project members have announced more details of the ambitious trials they will run in the coming months. Funded by the SESAR Joint Undertaking, the demonstration taking in Estonia and Finland will showcase how U-space can serve both unmanned and manned aviation.

“Seven advanced drone operational scenarios including both manned and unmanned aircraft in shared airspace demonstrate many of the most attractive use cases, relying on U-space services to be safe as well as cost effective with the aim to accelerate the realisation of a shared U-space in Europe, starting with low-level airspace. All three UTM technology vendors share responsibility for providing U-space services to the drone operators and authorities in the trials. Data sharing will happen through the FIMS as well as delegated directly from UTM to UTM serving the same airspace.

“The GOF concept enables shared situational awareness for all aviation stakeholders. The proposed SWIM-based, service-oriented architecture (SOA) underlines that the proposed data exchange layer might be subject to a centralised regime owned by the ANSPs providing unique services to U-space service providers (USSP). GOF addresses not only FIMS to USSP connectivity, but also proposes an open industry standard for connecting unmanned systems (UAS) to selected USSP services. ATM data, such as traffic information, is available to USSP’s through the FIMS, and vice versa, making U-space immediately relevant for low-level aircraft, such as Helicopter Emergency Medical Services (HEMS), air taxis and state aviation. FIMS’s in different Flight Information Regions (FIR) can also be interconnected, which will be demonstrated by connecting the FIMS in Estonia to the FIMS in Finland to handle cross-border operations in one of the trials.