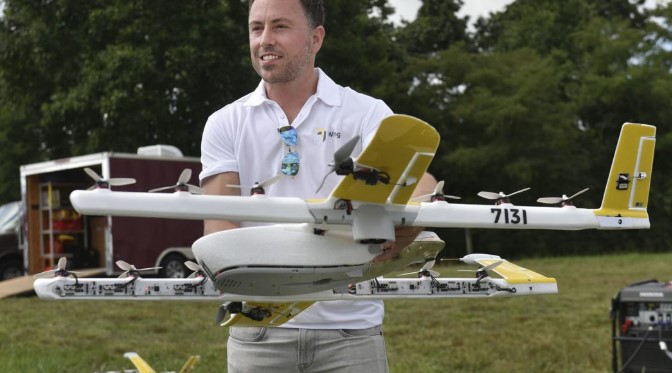 The settlement’s 22,000 people are set to become some of the first in the world to be able to order products online for drone delivery.

Wing spokesman, Jonathan Bass, told the Times that he expected the business to start the service by the end of the year, ideally by the autumn.

It plans to partner with retailers in the area from which customers can order items via an app. Drones will then automatically fly themselves to the retailer, pick up the package, fly to the customer’s home and hover overhead while a string lowers the products to the ground in a small cardboard box.

Bass refused to say exactly what would be delivered or to where. Nor has Wing disclosed its reasoning for first choosing the town of 22,000 people located more than 2,600 miles from the company’s Silicon Valley headquarters.

The business first made national news for delivering burritos near Virginia Tech’s campus for a few weeks in 2016 before focusing on Australia, where it launched its first full-fledged drone delivery trial in 2018, followed by Helsinki, Finland, earlier this year.

Wing will take a booth at Blacksburg’s Steppin’ Out festival where employees will show the public what the drones will look like before they begin flying around town.