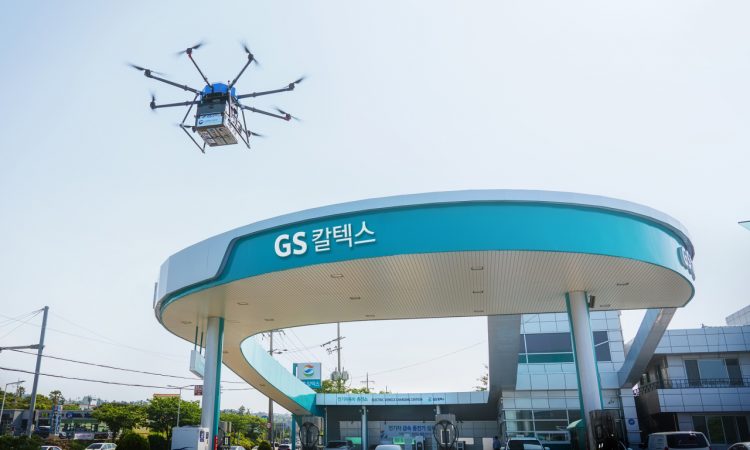 The South Korean government has co-operated with a State research institute to test a “combo operation” of a delivery drone and autonomous robot that delivers general groceries to customers living on a small island across a narrow strait, reports ajudaily.com.

The Ministry of Trade, Industry and Energy partnered with the state-run Electronics and Telecommunications Research Institute (ETRI) this week to demonstrate a combined drone service in Yeosu some 315 kilometres south of Seoul.

Delivery drones and autonomous robots are increasingly researched by government organisations and private companies for their versatility, convenience and cost-cutting abilities. Drones were trialled earlier in the year, to deliver medication for people living on various local islands. While, Woowa Brothers, the operator of South Korea’s popular food delivery service app Baedal Minjok, has tested autonomous robots to deliver food.

During this week’s trial a customer in Jangdo, a small island off Yeosu, ordered groceries using an app provided by GS25, a big domestic convenience store franchise. When the order was made, a drone carrying the food took off from a gas station operated by GS Caltex, a major refiner in South Korea, to fly across a narrow strait. During its flight, the drone reached a maximum altitude of 80 metres. When the craft reached an open grassy area in Jangdo, it descended to about one metre above an autonomous robot and carefully dropped its load onto the tractor-like robot’s carrying compartment before flying back to its base station in Yeosu. The autonomous robot then moved about 700 metres to reach its destination. The operation took around 10 minutes.

The delivery drone is capable of carrying up to 5 kilograms and fly at a maximum speed of 60 km per hour. It can stay up in the air for 30 minutes. The autonomous robot can carry a maximum load of 150 kilograms per run and navigate for up to 5 hours at a speed of 5 km per hour.

The demonstration is part of a USD30 million State project to develop non-face-to-face logistics and distribution infrastructure using 5G, drones, robots and AI.

In June, GS Caltex used delivery drones to carry lunchboxes and drinks from a gas station in the southern resort island of Jeju to a nearby elementary school. GS Caltex plans to use its nationwide network of petrol stations as the hub of a logistics system that can provide drone delivery, car-sharing, parcel delivery by vehicles and charging for eco-friendly cars.

South Korea with a web of 4G and 5G mobile communications has tested delivery drones in urban areas and remote places. The demand for rapid deliveries is high among villagers that live on islands that dot the south-western and southern coasts as logistics companies charge more for transportation services to islands.