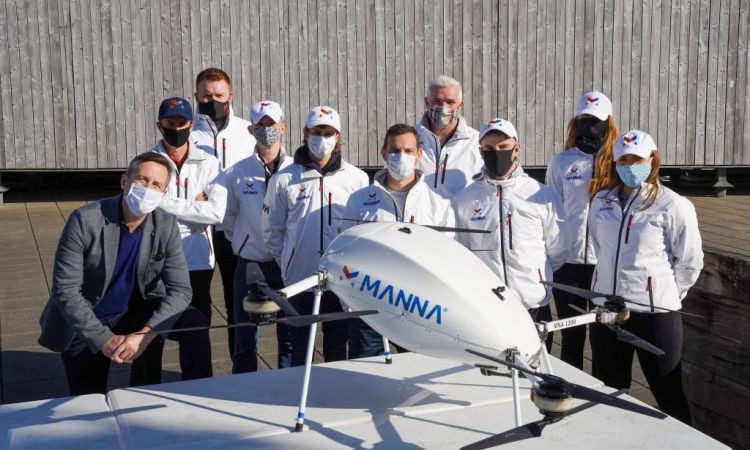 (An edited version of a feature originally written by journalist, Maija Palmer)

The Manna Aero drone delivery trial for Tesco supermarket began last October, around and over the small county Galway town of Oranmore (population: 8,000). While, it took a little time for local residents to get used to, now people are ordering everything from coffee and scones to eggs and broccoli, reports sifted.eu.

After initial surprise, the locals are warming to, even embracing the service and adjusting to their “skies of the future”, but Manna CEO, Bobby Healy, was even more amazed by what the residents purchased. “We had someone order a head of broccoli,” he says. “Who orders one head of broccoli for drone delivery? The broccoli cost less than a euro and then they paid EUR5 for that delivery.” He continues, “My favourite one was somebody at nine in the evening ordering a tub of nappy cream and a melon. You can see the nappy cream might have been an emergency if they had run out, but then they decided to add a melon to the order, you know… because they could.”

These products are delivered to the customer in under three and a half minutes, flown from the roof of the town’s Tesco superstore by one of Manna’s two-metre sized drones (a similar wingspan of a bald-headed eagle and the proportions of a labrador dog), and gently lowered to the doorstep on a long rope as the drone hovers overhead.

Apart from Tesco, all of the other shops in Oranmore are given the opportunity to have their goods delivered to people by drone, from the pharmacy and hardware store to the local coffee shop and Thai takeaway. Any product up to a weight of 2kg can be transported. Manna Aero charges the retailers a fixed subscription fee for the delivery service and retailers, in turn, are charging customers somewhere between EUR3 and EUR5 per delivery.

Though it has been operating for three months now, getting a delivery by drone is still something of an event for the town’s people. “It is like something out of this world,” says Siobhan O’Neill, Oranmore resident and mother of two. “When you get notified the drone is coming, you go in front of the house and then knock on the neighbours doors to come and see it arrive.” Manna’s drones, O’Neill says, are not particularly noisy. “You don’t really hear it, if you are indoors. Maybe just a low hum.”

The craft usually fly at around 80 metres above ground where they can’t be easily heard, and descend down to 15 metres when making the delivery. She says most people in the town have responded positively to the drones. And no, no-one has suffered any injuries from a takeaway meal or hot coffee landing on their head. Like many residents, she first ordered a drone delivery as something to amuse her children during the October school holidays. Afterwards, O’Neill has found herself using it once every few weeks mainly for convenience. Reasons vary from icy roads to when she discovers the family has run out of bread. During the Covid-19 pandemic the service has been particularly useful for people needing to self-isolate.

Healy says he’s pleased with the way ordinary usage has ramped up. “Everyone in the world is going to order one drone delivery, just to try it out, but the big question is… is it going to be used for normal deliveries?”

While half the orders remain a novelty like filling the basket with junk food and jellies, he points out, “We’ve been pleased to see the other 50 percent are for utility orders, 35 percent are repeat orders and half of those have used the service more than four times.”

Coffee deliveries are one of the surprise hits and the most commonly ordered item. This may change as the company has been given permission now to fly after daylight hours. Healy expects this to result in a big uplift in orders for takeaway meals, a potential market where dollar signs flash profusely.

One businessman aching to use Manna on a wider scale is founder of the Camile Thai Kitchen, Brody Sweeney. This takeaway chain is one of the restaurants taking part in the Oranmore trial, operating from a food truck parked outside the Tesco superstore. While, Camile Thai charges customers a EUR2.99 delivery fee, transportation by car or bike can actually cost the company up to EUR6. This is because delivery companies like Deliveroo and Just Eat can charge up to 30 percent of the order price. It is one of the “dirty little secrets of the restaurant trade”, where customer convenience is killing the profit margins for food providers.

Sweeney says, “Deliveroo and Just Eat are a bit like crack cocaine because while they bring sales, for the restaurant they are not profitable.” Adding,  “There will be a sorting-out in the sector as the pricing is adjusted.” Therefore, delivery drones are an attractive alternative, where economically they are more cost-effective and where two craft can do the work of several drivers.

“This is a genuine game-changer for us,” enthuses Sweeney, “As it ticks all the boxes.” Not only are drone delivery costs likely to be around half of what present road charges are, but the speed of delivery is faster. This leads Sweeney to point out, “The quicker the delivery is made the more likely the customer will re-order.” Adding, “When it comes to takeaways, speedy delivery trumps everything, even tastiness. For if the order is late, the customer is usually angry and will complain about everything. ‘Hangry’ is a real problem for the industry.”

If drone delivery was to become widely available, Sweeney calculates that around 70 percent of Camile Thai takeaways could be done that way. It won’t be suitable for all deliveries such as busy urban streets or office blocks, as the drones are more suited for suburbia, where people have gardens or driveways where products can be easily lowered. Just how much and how soon Manna Aero’s business can be expanded remains an open question, however. The company is the first to apply for the European Union’s light UAS operator certificate, which is recognised across all EU member states. Once this is granted, the skies above Europe’s 500 million consumers can open up for the company. The Irish Aviation Authority, which is known for taking a progressive view on new forms of flight, has welcomed the idea of drone delivery as a green and economically-efficient option. The company is hoping for a decision within weeks.

Earlier this month Manna raised new funding from John and Patrick Collison, the billionaire brothers behind the Stripe payment platform, to help speed that expansion, while a Series A investment round is being planned for later this year. Healy’s ambition remains big. Let us not forget, he is a successful serial entrepreneur, who built a previous company, CarTrawler, into a billion dollar business.

Meanwhile, in Oranmore, the service remains in the trial stage. Two Manna employees accompany every delivery in person, making sure that residents stay out of the way while the product is being dropped off. It would be a disaster if something went catastrophically wrong at this early stage. Although, there remains the occasional glitch.

O’Neill says that on occasions, the drones don’t work and Manna has then had to send the items by car. These sorts of difficulties need to be ironed out if the company is to expand the service worldwide. Wingspan of a Bald-Headed Eagle

City locations may prove especially tricky for the company where there are more rigorous flight restrictions and more customers living in high-rise buildings than in a small place like Oranmore. Yet, Healy says that his service only needs a town of around 25,000 people to be profitable.

A second and larger conurbation in Ireland is being lined up for a further trial and Manna is close to agreeing its first US location where it hopes to begin flying later this year.

Meanwhile, getting a Thai takeaway by drone is still the kind of novelty that has Siobhan O’Neill’s 6-year-old twins jumping up and down at the front door and the neighbours filming the craft’s arrival on their mobile phones. Healy wants this to become the norm. “We want to take half of the takeaway delivery market,” he says. Does Healy mean the entire world?!?

Umm… but first, he has to get the service right in Oranmore.