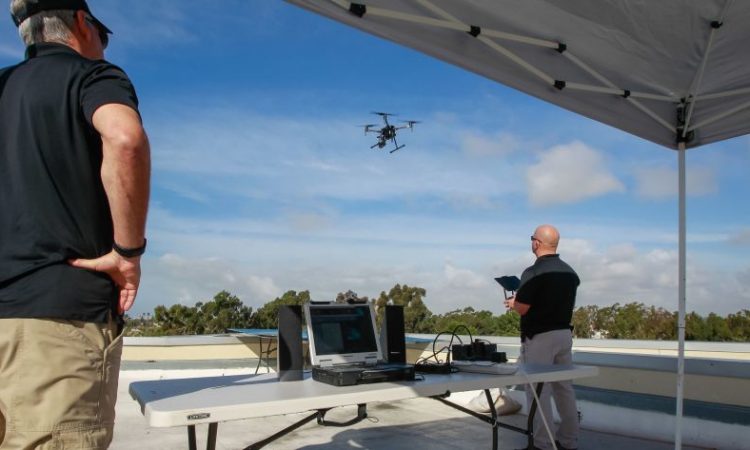 Police in California’s Chula Vista city have launched 1,000 drone flights in a year resulting in 130 arrests according to a report from the San Diego Tribune.

The idea behind the drone program 244,000-inhabitant town in the San Diego region of California. is to give authorities a real-time look at a scene minutes before police officers can arrive, the Tribune says.

“Drones can follow a fleeing suspect, catch footage of someone tossing evidence or witness a person wielding a weapon. That eye-in-the-sky view allows police to figure out precisely where to go, and what tactics and resources to use.

“Chula Vista police posted a highlight video on YouTube, showing off some of what their drones have done. It includes footage from a drone trailing a woman in a car, as she followed her motorcycle-riding boyfriend and eventually knocked him off the bike. It also includes footage of a fleeing burglary suspect who fell into a pool as officers closed in.

“The drones are part of a test program run by the Federal Aviation Administration. Last year, the city of San Diego partnered with others in the region — including Chula Vista police — to secure one of 10 coveted spots in the pilot program,” says the report.

“The goal of the program is to figure out how to safely integrate drones into national airspace. The Chula Vista Police Department is the only law enforcement agency in the pilot program,” the Tribune says.

“We are incredibly proud of the programme, because we think we have developed a new paradigm in policing,” Capt. Vern Sallee told the newspaper. “I think you are only going to see drone use expand.”

“Starting last October, Chula Vista began its program with baby steps. It used drones only on calls within a mile of the police station. That range has since increased.

“For now, the police drones only fly Monday through Thursday. The department wants to increase that to everyday use,” according to the report.

The title went on to lay out some facts about the programme:

Additionally, drones were most often used — 37.6 percent of the time — for calls reporting a disturbance. The second most common call — at 18.6 percent — that drones respond to are domestic violence reports.