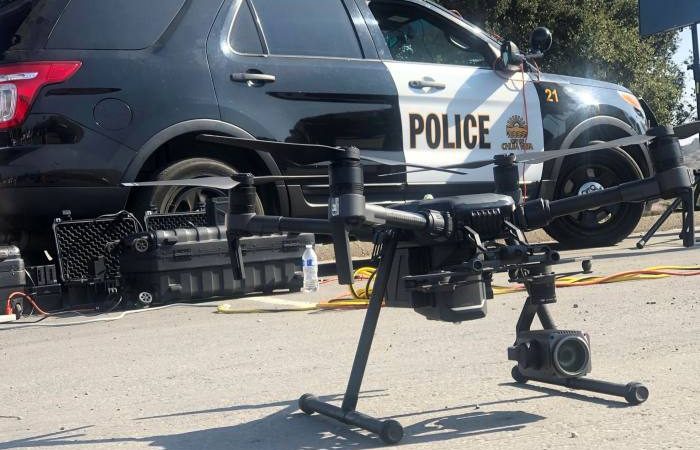 A police department in California plans to use drones equipped with loudspeakers and cameras to enforce a coronavirus lockdown.

According to the Financial Times, Chula Vista police bought two USD11,000 drones made by the Chinese company DJI, doubling the size of its small fleet, and plans to rig them up with speakers and night vision cameras.

“We have not traditionally mounted speakers to our drones,” explained Vern Sallee, one of the City’s police captains, “but  if we need to cover a large area to get an announcement out, or if there were a crowd somewhere that we needed to disperse, we could do it without getting police officers involved.”

This is a similar practice that countries around the world have used to control their populace by giving out warnings and advice. “The outbreak has changed my view of expanding the programme as rapidly as I can,” Sallee added.

Only weeks ago, US officials warned that Chinese-made drones, such as those produced by DJI, the world’s largest civilian camera drone company, were a threat to security.

Now drones could end up playing a vital role in helping to combat Covid-19 as emergency responders and delivery companies look for ways to limit human contact over the ensuing weeks.

Spencer Gore, chief executive of ‘Impossible Aerospace’, a California-based maker of high-performance drones used by first responders, said he is “working like crazy” to help a variety of other US law enforcement agencies — which he cannot name — set up their own drone programmes. Part of his pitch is that his company uses “Made in the USA” hardware.

“What we saw in China, and what we’re probably going to see around the world, is using drones with cameras and loudspeakers to fly around to see if people are gathering where they shouldn’t be, and telling them to go home,” Gore said. “It seems a little Orwellian but this could save lives.”

Brendan Schulman, vice-president of policy and legal affairs at DJI, said in light of the national emergency, the ‘Federal Aviation Administration’ (FAA) “should readily grant waivers on restrictions that might impede beneficial operations”.

Meanwhile, among Captain Sallee’s aims is to communicate with the homeless community, who are likely to lack reliable information on the virus outbreak. “We need to tell them we actually have resources for them — they are vulnerable right now,” he said. “It might be impractical or unsafe for our officers to be put into those areas.”

At present, his police department flies 10-15 operations per day, but only for emergency situations. He is now working with the FAA to expand usage to protect the community during the virus outbreak.

“This crisis could be a catalyst to spur the FAA to free up resources faster,” concluded Captain Sallee.