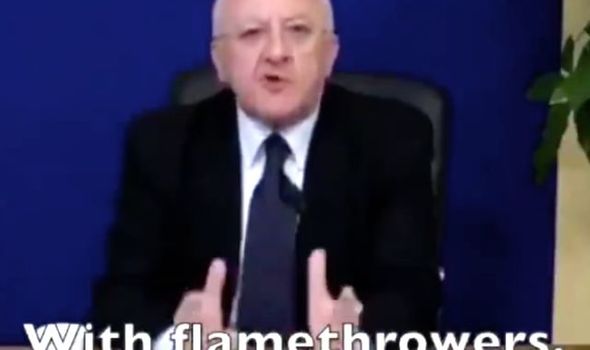 As reported by Urban Air Mobility News yesterday, Italy has expanded its deployment of drones to monitor citizens’ social distancing and outdoor movement. Yet, according to the Independent newspaper, Mayors are now becoming so angry and frustrated at the public’s disregard, they are telling police to carry out even more stringent measures.

Speakers attached to drones are now using far stronger language, for example. Sicilian Mayor, Cateno De Luca, shared a video on ‘Facebook’ today of drones flying around the city shouting messages in his voice like “Don’t go outside!” and “Go home! This is the order of Mayor De Luca and that’s that.” Another was allegedly heard to say, “Where the f*** are you going? You and your dogs. Go back home!” as a drone chased a group of people in woodland.

The Mayor of Messina, a city in northeast Sicily, said he “could not wait” to employ more drones and that “they will be everywhere”. Italy has been in lockdown since March 10th as it battles its coronavirus outbreak and according to official figures released today, 74,386 people are infected and to date 7,503 have died in the country.

A video shared on social media this week shows local politicians strongly criticising citizens for still playing table tennis socially or employing someone to cut their hair at home during the lockdown.

One Mayor had a veiled threat for those planning parties for their graduation. “We will send the police over,” Vincenzo De Luca, the president of Campania, said. “And send in drones with flamethrowers!”

Around 110,000 people have been charged for ignoring the lockdown measures, according to Interior Ministry figures. Those who break the rules now risk a far larger fine of between EU400 and EU3000.