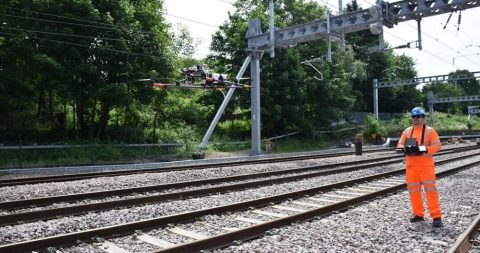 Railway trespassers are a blight on the networks around the world, so British Transport Police (BTP) have decided to trial drones in Scotland as airborne surveillance with the aim of spotting people on the tracks, according to the Edinburgh News.

The BTP believe the drones’ success could significantly reduce the time that lines are closed, avoid accidents, stop potential suicides and find missing people. More than 2,000 trains a year in Scotland arrive late because of trespassers on the line. For example, delays totalling 32,000 minutes – the equivalent of three weeks – were caused by trespassers in the year to March, including 186 times by children.

The innovation is seen as having particular potential on remote routes which take officers longer to reach. Drones would be sent to incidents so their operators could rapidly assess what had happened and how to respond. They could be mobilised in response to train drivers reporting people on the line.

BTP said it hoped to start the trials within months once the legal requirements had been completed. They will be jointly run with Network Rail Scotland, which already uses drones to check tracks

A BTP spokesman said: “We are looking at ways of best using technology across Scotland’s railway to tackle all forms of disruption. Some of the network is very rural, where the use of technology might be more efficient than using Network Rail or BTP staff.” The spokesman continued,  “The aim is to improve the passenger experience, reduce disruption and enhance safety. Drones could prove to be a massive benefit as there is the potential to cut out a huge amount of time from the disruption caused by incidents.”

Network Rail Scotland said 2,141 trains were classed as late in the year to March because of incidents caused by trespassers – the equivalent of virtually every ScotRail service being delayed on a single day. BTP stressed that drones would not used in conjunction with biometrics or facial recognition technology.

Police Scotland launched drone tests in Aberdeen and Inverness a year ago to help search for missing and vulnerable people. These are deployed by specially trained officers from operational support units and transported in marked police vehicles.

Network Rail Scotland route director Liam Sumpter said: “Trespass causes significant delays across our network each year. We work closely with BTP to try to prevent the public illegally accessing the railway and to remove them as quickly as possible when they do. We already use drones to help manage and inspect our infrastructure.”

Sumpter continued, “We are always keen to explore ways in which we can use new technologies to reduce disruption and further improve the service we provide to our customers.”

The increasingly widespread use of drones in Scotland has also seen them deployed to deliver coronavirus test kits, protective equipment and other medical supplies between hospitals in Oban and Craignure on Mull. The trial by drone delivery firm Skyports, which was due to end on Friday, has cut transfer times to around 15 minutes, replacing road trips that include a 45-minute ferry journey.

Drones have also been used for inspection work, such as on the Forth Road Bridge following structural damage which closed the crossing in 2015.