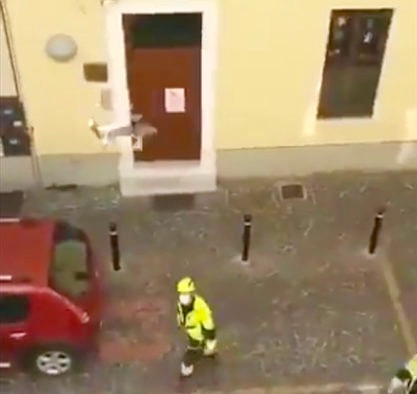 Italy, the worst hit European country to date has reported over 1,000 deaths due to the virus. The country has gone into lock down and harsh prison sentences have been proposed for individuals who break the isolation.

According to nationalfile.com, a video tweet was posted yesterday captioned, “#Coronavirus video from Italy: this is what enforcing people to stay home looks like. Police patrolling the streets w/ drones.” The film shows a scene reminiscent of leaked footage from quarantined Chinese cities. The secretly taken video portrays police wearing protective clothing, walking down a street, followed by a drone with a tannoy telling people to remain indoors.

Italy has struggled to prevent the spread of the coronavirus, which has seen schools, shops, and public sporting events shut down and where the elderly population have taken the brunt of the epidemic with over 15,000 reportedly infected.

Public services are under massive pressure to cater to the growing demand from such patients. Calls to stop providing the affected elderly with intensive care have been voiced by medical professionals as resources are being stretched to the limit.