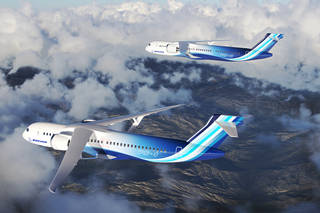 NASA announced Wednesday it has issued an award to the Boeing Company for the agency’s Sustainable Flight Demonstrator project, which seeks to inform a potential new generation of green single-aisle airliners. Under a Funded Space Act Agreement, Boeing will work with NASA to build, test, and fly a full-scale demonstrator aircraft and validate technologies aimed at lowering emissions.

According to a NASA release:

According to NASA Administrator Bill Nelson. “It’s our goal that NASA’s partnership with Boeing to produce and test a full-scale demonstrator will help lead to future commercial airliners that are more fuel efficient, with benefits to the environment, the commercial aviation industry, and to passengers worldwide. If we are successful, we may see these technologies in planes that the public takes to the skies in the 2030s.”

Through the Sustainable Flight Demonstrator project, Boeing and its industry team will partner with NASA to develop and flight-test a full-scale Transonic Truss-Braced Wing demonstrator aircraft. The Transonic Truss-Braced Wing concept involves an aircraft with extra-long, thin wings stabilized by diagonal struts. This design results in an aircraft that is much more fuel efficient than a traditional airliner due to a shape that would create less drag – resulting in its burning less fuel.

“NASA is working toward an ambitious goal of developing game-changing technologies to reduce aviation energy use and emissions over the coming decades toward an aviation community goal of net-zero carbon emissions by 2050,” said Bob Pearce, NASA associate administrator for the Aeronautics Research Mission Directorate. “The Transonic Truss-Braced Wing is the kind of transformative concept and investment we will need to meet those challenges and, critically, the technologies demonstrated in this project have a clear and viable path to informing the next generation of single-aisle aircraft, benefiting everyone that uses the air transportation system.”

NASA’s goal is that the technology flown on the demonstrator aircraft, when combined with other advancements in propulsion systems, materials, and systems architecture, would result in fuel consumption and emissions reductions of up to 30% relative to today’s most efficient single-aisle aircraft, depending on the mission.

Through separate efforts, NASA has worked with Boeing and other industry partners on advanced sustainable aviation concepts, including the Transonic Truss-Braced Wing concept.

The project is an activity under NASA’s Integrated Aviation Systems Program and a key element of the Sustainable Flight National Partnership, which focuses on developing new sustainable aviation technologies.