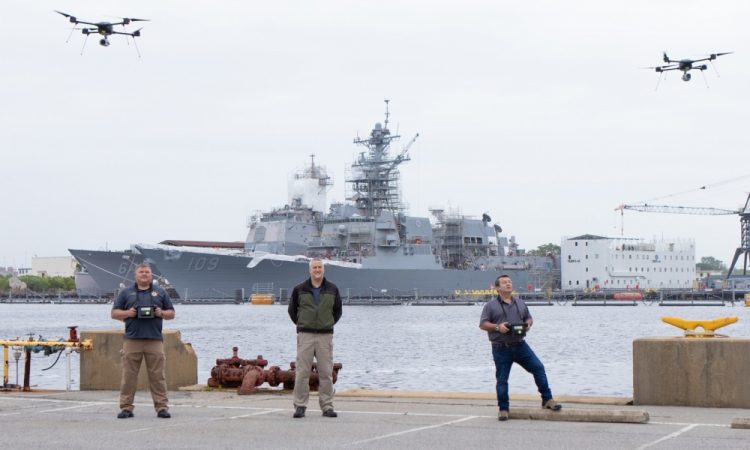 According to dvidshub.net, drone technology was employed at America’s Norfolk Naval Shipyard (NNSY), in Portsmouth, Virginia, for repairing damage to several buildings after a storm wreaked havoc on April 13th. The NNSY is the oldest and largest industrial facility that belongs to the US Navy. Fortunately, no employees were injured.

Various naval departments worked together to assess the damage and then rapidly make repairs under the direction of NNSY’s Nuclear Engineering and Planning Manager (NEPD) Curt Hart. He was concerned performing a traditional inspection of the area would have taken weeks to complete. Instead, Hart called upon Security and Fire (Code 1120) and the Public Works Department (PWD) to use drones to assess the damage.

Refueling Secretary Branch (Code 1124) Head Rob Hale, explained, “by using the Unmanned Aerial System (UAS), we were able to save significant time that would have been required to construct staging for access to the involved areas.”

Hale and his team worked with Public Works Officer Commander William Butler and Engineer Chris Boucher to plan the flight and identify a launch site for the drone. Additionally, they partnered with NNSY’s Duty Office and Police Department so they were aware of the project.

The flight produced direct visual observation and still photos of the areas of interest. The images captured confirmed engineers suspicions that the building had failing window fasteners and provided details that would not have been able to be captured without drone support.

Just one and a half hours drone work saved several weeks’ worth of time and effort. “This saved time and money, eliminated the need for personnel to perform high-risk work, and provided better support for the Fleet by getting the critical shop resources located inside the building back in action quicker,” said Hale.

The project paved a path forward at NNSY to utilize drones on work previously done by personnel such as rooftop inspections, crane boom inspections, and in confined spaces. The shipyard’s Technology and Innovation (T&I) lab has begun working to determine how UAS can be used industrially. NNSY forces plan on using drones to support emergent security and fire situations and emergency management.