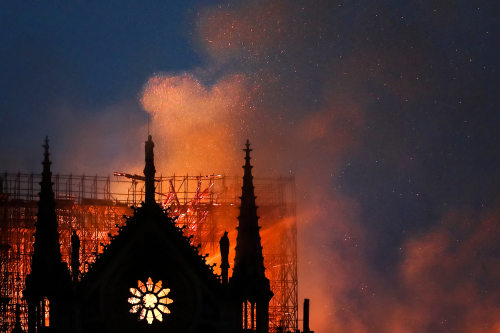 Firefighters in Paris used drones to help combat the Notre Dame fire which destroyed much of the roof and interior on 15 April 2019. According to The Verge, by flying DJI Mavic Pro and Matrice M210 drones over the Notre Dame cathedral, firefighters were able to get essential data for taming the flames. Fire brigade spokesman Gabriel Plus told local media that the drones were instrumental in saving the cathedral’s structure. “The drones allowed us to correctly use what we had at our disposal.” Firefighters also relied on the Mavic Pro’s visible light camera and optical and electronic zoom, according to DJI’s director of public safety integration, Romeo Durscher.

Drones are generally geofenced to prevent flying over prohibited areas, however the Paris restrictions were removed by DJI to cooperate with authorities’ purposes, according to The Verge. Any drone operator can request that geofencing can be unlocked provided they have approval. Paris firefighters do not currently operate drones but worked with the Parisian Police Drone Unit cell, which is a dedicated team of professional drone pilots ready to intervene in critical missions.