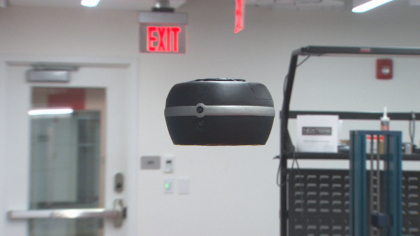 An Amercian start-up, Cleo Robotics, based in Boston, Massachusetts at the city’s new MassRobotics facility, has given drones a little but special make-over that may create a big positive difference for security and safety, reports cbslocal.com.

Omar Eleryan, the company’s CEO, said, “What we’ve done is a leap forward in technology and capability.” This leap is a drone called The “Dronut” due to its shape. A unique feature being that its propellers are housed inside the craft.  Eleryan continued, “The Dronut has two counter-rotating propellers, which is a basically a ducted fan, UAV.”

And the benefits of keeping those propellers inside are immense. Simon Czarnota, Cleo’s co-founder and chief technology officer, explained, “We’ve designed the drone to fly into confined and enclosed spaces where it might be dangerous or inconvenient for a human to enter.” (watch video below)

For example, law enforcement or the military will be able to send the Dronut into dangerous areas without the risk of a propeller hitting a wall or object and breaking the device. It’s safe enough, in fact, to catch in mid-air and why the “Dronut” will be available shortly for the consumer market.

Eleryan adds, “You can imagine this technology being used as a robotic security guard in your home or business or even delivering your packages.”

The Dronut is only being sold right now to military and law enforcement. The researchers next goal is to make it quieter. They say they’re about six months from making that happen.