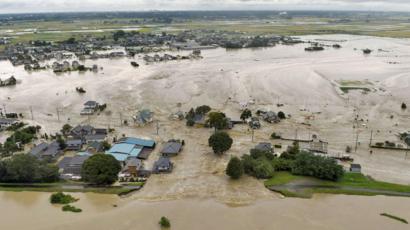 Arithmer Inc., an entrepreneurial spin-off from the University of Tokyo, shows the possible flow of floodwaters from rivers and streams on a 3-D map, using measurement data from drones. As the simulation can be completed within a few hours, compared with several months or even some years under conventional methods, the invention is drawing attention from local governments around Japan.

In June, the coastal town of Hirono in Fukushima Prefecture became the first municipality to sign an agreement with Arithmer to introduce the technology. It hopes to utilise the system not only for forecasting damage from floods and tsunami, but also for issuing disaster victim certificates faster. According to Arithmer, which utilizes mathematical theories to develop AI programs, inquiries are pouring in from around the country.

Yoshihiro Ota, President of Arithmer, who is also a mathematician, said the AI-based technology could prove helpful for both municipalities and businesses. “Flooding estimates can be made by combining all available elements such as rainfall and where river embankments collapse,” said Ota. “Our system will allow evacuation centres and factories to be set up at much safer locations.”

During torrential rainfall, inundation damage has been reported around small and midsize rivers and other locations that were not identified by local governments as dangerous. That is, in part, because geographical data collected for estimates through aerial laser measuring and by other means typically do not cover an entire region. Another problem is that it can take a long time to process a vast amount of data on rainfall and water flows, rendering it difficult to locate all areas that would likely be inundated.

The technology developed by Arithmer and its partners can create computerised reproductions of streets and rivers scanned by drones at a precision level of 1 centimetre by 1 cm.

It can also automatically complete the otherwise time-consuming flooding prediction promptly because the AI system learns characteristics of each area based on the estimated rainfall, water levels in rivers, the locations of dams and other factors. As 100 or so scenarios can be simulated, it is possible to identify the worst case areas amongst them.