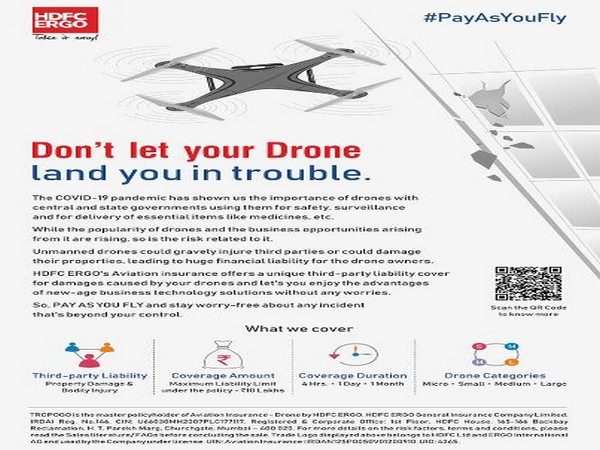 This policy will be offered on-demand to customers as a ”pay as you fly”, the insurer said in a statement. Third-party insurance liability claim is mandatory for drone operations in the country. Various government bodies and especially police have been using drones in their fight against the coronavirus pandemic which has killed over 9,500 people in the country.

Ritesh Kumar, the MD of HDFC Ergo General Insurance said, “Drones are being used in outdoor commercial activities where operational mistakes and equipment failures may cause damage to third parties.” Kumar continued, “Considering this, we are launching cover under our aviation insurance, which is a first in the industry, to safeguard owners and pilots from any third-party liability while flying a drone commercially.”

Drones have proven to be efficient and beneficial for public surveillance given they were effectively used by the police to implement crowd monitoring as well as for delivery of essential goods like medicines. Sandipan Sen, founder of Tropogo said third-party insurance is now mandatory for drone operations and there has been a demand from the drone operators for insurance. “Unfortunately, until now, no insurer offers such a cover along with the flexibility to buy the policy through a digital platform.” Adding, “We identified this as a problem and so partnered with HDFC Ergo to offer the country’s first on-demand pay-as-you-fly third-party liability cover for drone owners and operators.”

By the end of January over 20,000 drones had been registered with the Indian government’s registry window. It is believed there are still many more to be enlisted, so the government has now extended  their registration window, but with no final closing date announced. The ownership of a drone without registration leads to a monetary fine.