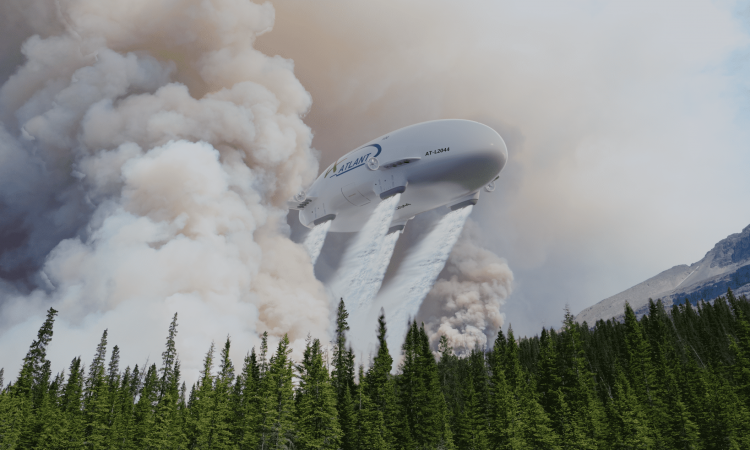 Atlas LTA, a newly established Israeli company, is developing a family of innovative airships to be powered by electric motors. The biggest model, the ATLANT 300 will be 200m long, 100m wide and 50m high. It will be able to carry 165 tons of cargo to 2,000 km at a speed of 120km/h in all weather conditions.  The other two models are ATLANT 30 and ATLANT 100, able to carry 18 tons and 60 tons accordingly.

The airships will not need ground facilities to take off or to land;  ATLANTs can operate in developed and developing regions of the world without the environmental damage that always follows large transport infrastructure construction projects, say proponents.

The ATLANT is being developed to fulfil humanitarian roles where logistic difficulties are significant obstacles. An industrial application is the transport of large wind turbine blades, especially in offshore installations which can cause serious logistic problems. ATLANT can also operate as an airborne crane and a transporter.

According to Gennadiy Verba,‏ CEO and Founder: “The airships being developed by Atlas have a number of advantages in comparison to any aircraft and sometimes ground transportation option. First, there is a low cost per ton-kilometer. There are much lower greenhouse gas emissions – 30-40% less than the most effective airplanes and five to seven times less than the best heavy helicopters. And that is only the beginning – our electric powertrain enables us to reach zero emissions within the next seven to eight years, much faster than other flight vehicles of the comparable size.  Capable of operating in the most difficult weather conditions ATLANT could be a good alternative to operations which requires ice roads open only at wintertime in countries like Russia or Canada”.

Verba says that ATLANTs can take off vertically and fly point-to-point missions, like a helicopter or drone, but capable of carrying much larger loads, further and cheaper.