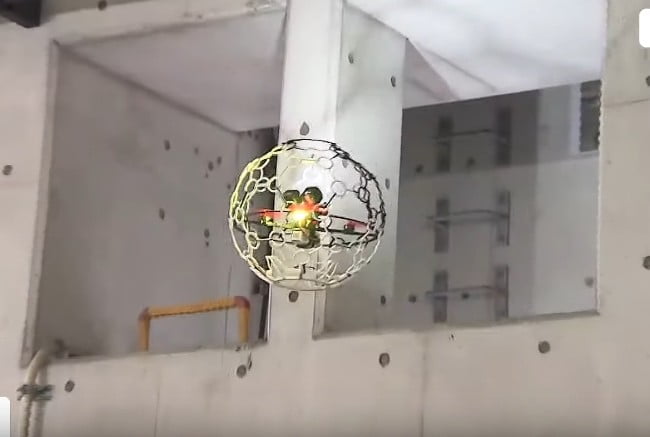 The Tokyo Metro are using drones to inspect the upper sections of train tunnels to great effect reports DigitalTrends.com .

Instead of using scaffolding and elevating platforms that take time to set up, the drones can easily fly right up to vents or other parts of the tunnel, sending a live video feed to the nearby operator. High-resolution still images are also captured for later analysis.

The remotely controlled 1.15kg heavy custom-built copter is enclosed in a spherical 22-cm-diameter plastic cage to protect it from occasional knocks as it flies around inspecting the tunnels. The machine’s small size enables it to slip between pillars and through gaps in the concrete as it searches for issues like structural irregularities or water leaks.

Although a visual inspection from the ground is sometimes enough to determine whether there’s a problem that needs to be addressed, on occasions, scaffolding needs to be constructed, or a works vehicle with an elevating platform deployed, for a closer look.

The drone is much quicker to set up and more cost-effective than these traditional methods and is able to gather more detailed data in a short period of time.

Tokyo Metro’s nine subway lines cover around 195 km, with 85% of the track running through tunnels. The drones are currently being used only on one of the city’s subway lines, but the plan is to deploy them on all 10 of its lines before the end of this year.