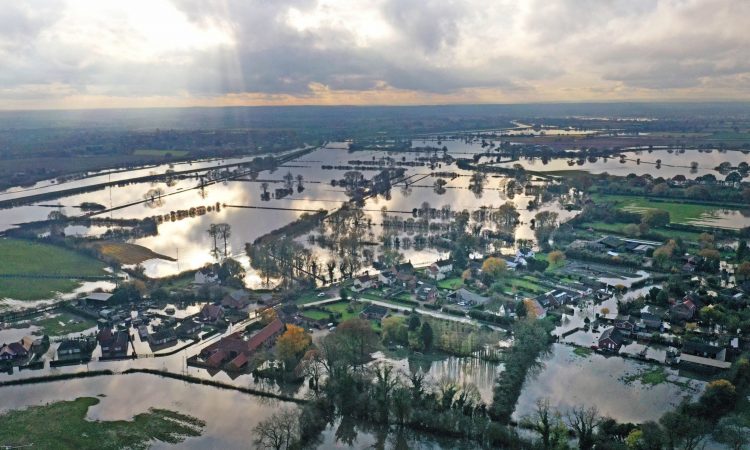 First it was Storm Ciara in early February, followed by Storm Dennis a week later, and now the UK will be ravaged again by high winds and torrential rain from Storm Jorge during the next few days with 80mm of rain – a month’s value – forecast to hit Wales and Northern England today. Winds are expected to reach 70mph on coasts and as much as 60mph inland. This will be the third major UK flooding in just one month!

Many hundreds of homes have been underwater across the country in the wake of storms Ciara and Dennis with England already receiving 141% of its average February rainfall.

According to the Daily Telegraph, Ewan Kirk, founder of hedge fund Cantab Capital, said getting vehicles such as helicopters to a site can be expensive. “Drones are cheap and cheap is important because you can have lots of them,” he said. “Is it better to have ten drones flying around than one helicopter? Absolutely. Do you get better data? Absolutely, because drones can potentially stay aloft a lot longer.”

He went on to say, “Emergency services tackling floods and climate change should use “cheap” drones instead of helicopters to monitor stricken areas.”

The Environment Agency tracks flooding using gauging stations around the UK, which allows it to spot when water levels are rising, although can also deploy aeroplanes and boats to assess the extent of flooding. It currently does use some drones to map river channels.

Meanwhile, The Evening Express reports that a drone was used to survey a 500-metre section of the temporary flood defence in Ironbridge, Shropshire,  a few days ago, after residents reported a loud bang when the barrier was shunted into a kerbstone by the fast-flowing River Severn.

Speaking at the scene, Mark Sitton-Kent, director of operations for the Environment Agency, explained the barrier had been undermined by the sheer volume of water. A drone was used to inspect the defences.

Sitton-Kent commented, “It’s not safe to go behind the barrier so we use the drone to fly in and examine it. We have used that all the way along and we are feeding that live into the command unit.

“Over the next 48 hours as the river level here drops, we will move in and do some work to shore up the area and make sure it stays put.”