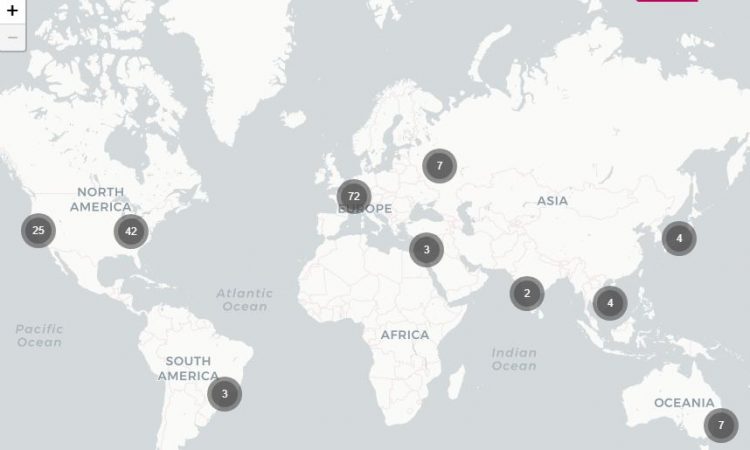 The number of electrically propelled aircraft around the world is pushing 170, according to a new report on urban air mobility published by Roland Berger, which includes an interactive map of development programmes. “Our developments database grew by ~50% since April, 2018, and estimates suggest there could be more than 200 by the end of 2019…An industry-wide shift towards developing electrically-propelled aircraft is ongoing, and recent developments have only increased the momentum…Urban air taxis still dominate the scene, representing about 50% of all developments mapped.”

“The pace of announcement of new Urban Air Taxi concepts has beaten other categories of aircraft, rising from ~45% to 50% of the developments in the Roland Berger database. As can be expected, this came with entries from important aerospace players, such as Boeing, which in January 2019 announced the successful first test flight completion of its autonomous passenger air vehicle (PAV) prototype. Developed by the Boeing NeXt division – which leads the company’s efforts in urban air mobility – along with Boeing subsidiary Aurora Flight Sciences, the PAV can carry 2 passengers and has a range of up to 50 miles. The PAV demonstrated a controlled take-off, hover, and landing, though future testing is needed to validate forward, wing-borne flight and the transition phase between vertical and forward-flight modes – Boeing described this transition phase as most significant engineering challenge for a high-speed VTOL aircraft.

“Concurrently, there are now 100 projects being conducted around the world by cities, universities and potential operators to test and develop the UAM ecosystem. Find out more in our interactive map.

“Last but not least, the general public also have a role to play, especially when it comes to urban air taxis. Airbus UTM, a division of Airbus’s Urban Air Mobility Unit, recently published results from a preliminary study on UAM public acceptance. Of 1,540 people surveyed, 44% indicated they support, or strongly support, UAM deployment – interestingly, those in the 23-34 age group were more likely to have a positive initial reaction to UAM compared to 75-84 years-olds. In addition, 67% of respondents from Mexico City said they were likely or very likely to use UAM, compared to only 27% in New Zealand. Top concerns include safety of individuals in the ground and noise pollution.”